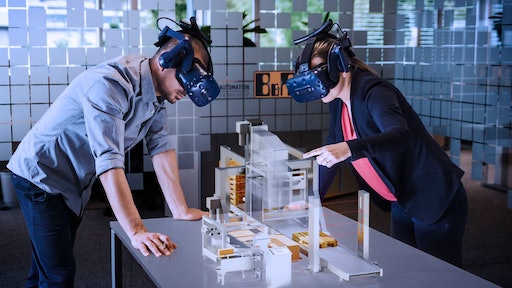 Wearing VR or AR headsets, machine developers can interact directly with their model, free of distractions.

B&R has integrated the industrialPhysics simulation tool into its Automation Studio engineering environment. The 3D simulation software greatly simplifies model-based machine development. Developers can import CAD data from machine components or entire machines directly into the simulation tool. Then they can quickly and easily generate a digital twin for developing and testing the machine software.

Digital twins are the key to efficiency when it comes to software development and the virtual commissioning of a machine. industrialPhysics generates digital twins from CAD data. The data is imported in STEP format, which makes it possible to utilize important properties of the CAD design, such as mass and density. Since the simulation tool is integrated with Automation Studio, developers are able to run the virtual model of the machine right on the PC and connect with the controller.

The simulation tool makes it possible to view physical behavior of the machine in real time. Developers can simulate the flow of materials through the line and identify potential collisions early enough to make easy corrections.Virtual reality

With no additional effort, the machine model can also be viewed using virtual reality or augmented reality headsets. Free from any distractions, developers can work directly with the simulated machine. Processes can be evaluated with the simulation running. Augmented reality offers the added benefit of being able to view the model on-site in the real environment.

5 Manufacturing Trends to Watch in 2020

The Senate has passed a $1 trillion bipartisan infrastructure bill, which now moves to the House.
Sara Jensen
August 10, 2021

Grid Raster says the remote work and training capabilities offered by augmented reality have increased its relevance in many industries.
Sara Jensen
August 10, 2021

The Aging Workforce: Four Ways Manufacturers Can Prepare Themselves

AEM highlights key steps manufacturers can take to prepare themselves for a changing workforce.
Association of Equipment Manufacturers (AEM)
July 29, 2021

The company's DURON heavy-duty engine oils, HYDREX hydraulic fluids and PRODURO transmission drivetrain oils are among those which will be exhibited at the event.
Petro-Canada Lubricants Inc.
July 6, 2021

The MXFS is a fiber Bragg grating measurement device, which makes it easy to install and electromagnetically safe.
HBM
July 3, 2021

Improving technology and wider spread adoption is leading to increased use of augmented and virtual reality.
Sara Jensen
June 28, 2021
Follow Us