Powder coatings to protect soldiers and the environment

PPG Industries has received a grant from the U.S. military to develop a chemical-agent resistant powder topcoat for use on military vehicles. 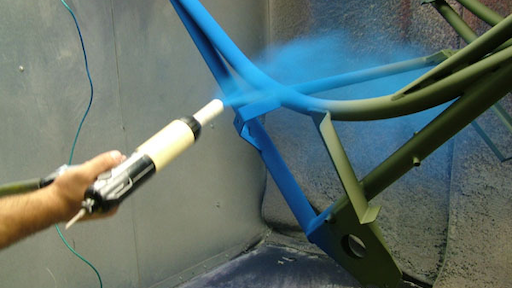 An example of the powder coating process.

According to Larry Fitzgerald, Senior Scientist at PPG, the military has been looking for ways to utilize more environmentally-friendly coatings for its equipment. Powder coatings are of particular interest because they are not solvent based and therefore emit no volatile organic compounds (VOC), which can have harmful effects on the environment and the people applying the coatings. Using low-VOC coatings would enable the military to reduce its carbon footprint as well as protect the health of those applying the coating.

So far, the use of powder coatings in the military has been limited to interior applications and some primers, says Fitzgerald. This is due in part to the lack of powder coatings available which meet the requirements of chemical-agent resistant coatings (CARC). Development of a CARC powder topcoat, however, would enable the military to expand its use of more environmentally friendly coatings without losing the ability to protect its soldiers in the field.

In order for a coating to be considered chemical-agent resistant, it must be able to withstand exposure to chemical agents as well as the neutralizing agents that are used to clean up chemical agents in the event of exposure. “That’s the way chemical-agent resistance is managed right now,” says Fitzgerald. “[It has to be] an effective barrier and have the ability to be cleaned up afterwards.”

To determine whether a coating will meet these criteria, samples must be sent to the U.S. Army Research Laboratory (ARL) where they will be exposed to a variety of live chemical agents. Coatings which are able to withstand exposure to all of the chemical agents used in the test, as well as decontamination solutions, are classified as chemical-agent resistant.

Meeting camouflage requirements is also an important element to the design of a CARC, particularly one that will be used on the exterior of a vehicle such as a topcoat. A camouflage coating is one that has a low gloss so that it will not be shiny and easily seen in the light. CARC topcoats must also be resistant to ultraviolet (UV) rays from the sun and durable enough to withstand a variety of harsh operating environments. “You put all those things together [and] you have a significant formulation challenge to be durable, and meet camouflage and chemical-agent resistance requirements,” says Fitzgerald. He adds that there are other necessary criteria, such as proper adhesion, “but those are the three major requirements that make it very difficult for powder coatings to meet the challenge that the army’s looking for.”

PPG has been making powder coatings for several years and is bringing that expertise to the development of the chemical-agent resistant powder topcoat. “We’ve developed some manufacturing techniques that are unique to how we make some of the powders we sell that we think will help our efforts,” says Fitzgerald.

The company has also invested in high-throughput screening (HTS) techniques to help speed up the development of new polymers. HTS is a robotic system which enables researchers to quickly execute several chemical tests at a time to more easily narrow down the correct formula for a product such as a coating. “Polymers are the major component of the coatings,” says Fitzgerald, “and [with HTS] we have the capability of producing new polymers at a rate that’s about 10 times faster than if you do it by hand.”

Though PPG is still in the early development stages for its chemical-agent resistant powder topcoat, the company is hoping to have a finished product available soon. And once it does, PPG sees the coating being beneficial to industries other than the military, as well. “The one part of the coating that will allow the chemical agent resistance is general chemical resistance,” says Fitzgerald. “We’ll have identified powder coatings that have a very high chemical resistance and there are other applications that would value that.”

One of the biggest benefits to using powder coatings is their low level of volatile organic compounds (VOC), which can be harmful to both humans and the environment. Due to the dangers VOC can impose, most regions of the world require painting operations to get a permit which limits the amount of VOC that can be emitted during the painting process. Using a powder coating instead of a liquid one, however, diminishes potential health and environmental harm as well as eliminates the need for a permit since powder coatings have essentially zero VOC content.

Made from small particles, powder coatings are solid at room temperature and sprayed onto a vehicle or component that receives a charge opposite to the one being applied to the coating. For example, the coating will have a negative charge and the component a positive one. Using opposing charges in this manner enables the powder coating to stick to the item being painted. The vehicle or component is then heated so the powder will melt and fuse together, forming a coating or film. Applying the coating in this manner provides better coverage, allowing the coating to more easily get into nooks and crannies that liquid coatings sometimes cannot reach. Larry Fitzgerald, Senior Scientist at PPG Industries Inc., adds that the sags and drips which commonly occur with liquid coatings do not happen when powder coatings are used.

Powder coatings are also reclaimable. Any powder that does not make it onto the item being painted can be collected and reused to paint another item. “You can [have] 100% utilization out of the powder,” says Fitzgerald.

Additionally, items which have been powder coated are cured in an oven and are cool to the touch within about 30 minutes of being removed from the oven. Liquid coatings, on the other hand, are air dried at room temperature and often take a couple of days to fully dry. Being able to handle a newly painted piece of equipment within hours instead of days enables much faster turnaround times. “That productivity gain is a big deal to the military,” says Fitzgerald.

PPG's F4943 Fast Dry Urethane Sealer features a 2.1 VOC rating which makes it compliant for all parts of the U.S. and Canada.
PPG Industrial Coatings
June 6, 2018