Maplesoft has announced its involvement in several STEM programs, offering support in various ways such as through the donation of its software products. 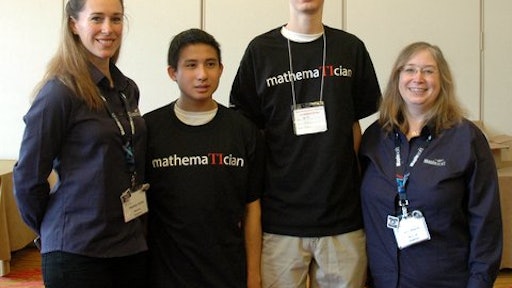 National winners of the Who Wants to be a Mathematician contest with Maplesoft staff at Joint Math 2015.

Maplesoft, a leader in software products for technical education and research, has announced its involvement in several exciting initiatives for high school and middle school students. As part of its efforts to encourage interest in STEM (Science, Technology, Engineering and Mathematics) education, Maplesoft supports programs that range from nation-wide high school math competitions to workshops that explore math and science concepts. These programs aid in deepening students’ understanding and encouraging their interest in STEM subjects.

Maplesoft is the Technology Sponsor of the Who Wants to be a Mathematician contest, which is organized for high school students by the American Mathematical Society (AMS). The competition annually draws over 2,000 young minds from 200 schools throughout the United States. The contest recently moved from paper based testing to digital testing when Maplesoft provided access to Maple T.A. so the tests could be taken online. The use of Maplesoft’s testing and assessment tool saved organizers significant time and money, and also provided the opportunity for more students to get involved. Participation numbers doubled the year Maple T.A. was first implemented.

“With the technological advancements around us, it only seemed natural that we move our contest online,” says Michael Breen, host of the Who Wants to Be a Mathematician competition. “We are grateful to Maplesoft for helping us make the move to online testing, thereby allowing us to involve more students and, for many of them, reigniting their love of math.”

For several years, Maplesoft has supported the SEE-Math program for middle school students with the donation of its mathematical software, Maple. SEE Math is a summer enrichment workshop organized by Philip Yasskin of Texas A&M University, and attended by gifted middle school students. The students spend two weeks exploring ideas from algebra, geometry, graph theory, topology and other mathematical topics. A popular activity in the course is computer animation, where students use Maple’s visualization tools and programming language to create their own animated movies.

“Maple has always been helpful in developing the students’ mathematical intuition in general, and the 3D visualizations in Maple are extremely valuable when it comes to learning some difficult topics, making them much more understandable,” says Yasskin.

The annual International Summer School for Young Physicists (ISSYP) is a two-week camp that brings together 40 exceptional physics-minded students from high schools across the globe to Canada's Perimeter Institute for Theoretical Physics. Participants gather at the research institute to learn about the latest advancements in theoretical physics and to experience physics research up close. Each year students receive a complimentary copy of Maple, and use the product to practice and strengthen their math skills. “We are so pleased to be able to incorporate Maple into the curriculum for students,” says Greg Dick, Director for Educational Outreach at the Perimeter Institute.

“Engaging students with new ways of exploring STEM subjects is at the heart of what we do here at Maplesoft,” says Jim Dell, Vice President, Marketing, Maplesoft. “The programs that Maplesoft sponsors foster creative learning, and encourage interest and excellence in STEM subjects. We are pleased to be a part of this process.”

This year, Maplesoft is also sponsoring, among other programs, the Julia Robinson Math and Computing Festival to encourage middle school girls in their pursuit of math; the ScienceExpo Conference, a student-run event that engages students with STEM-related opportunities and workshops; and the Canadian Open Mathematics Challenge, a nation-wide high school math competition.