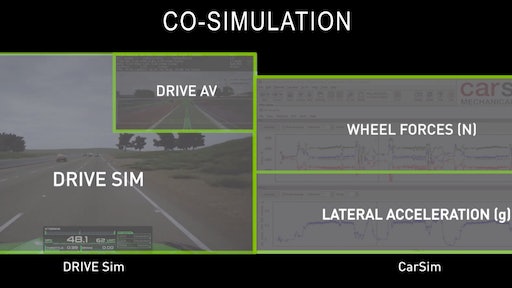 Co-simulation of DRIVE Constellation environment on the left and CarSim vehicle model on the right.

Mechanical Simulation Corporation, creator of CarSim and TruckSim, announced today it is making its industry-validated vehicle dynamics models available on the open and scalable NVIDIA DRIVE Constellation simulation platform, which is used for testing autonomous vehicles in the virtual world.

This means that every aspect of driving — from how long it takes the car to brake to how it performs on slippery roads — can be accurately recreated in simulation. The level of detail provided by the CarSim vehicle models, combined with the level of detail for the environment provided by DRIVE Sim, makes it possible for these tests to easily translate to real-world results.

DRIVE Constellation is an open platform, offering a programming interface that allows users or ecosystem partners to incorporate their environment models, vehicle models, sensor models and traffic scenarios. By working with a variety of partners, the platform can generate comprehensive, diverse and complex testing environments.

DRIVE Constellation simulates the environment, traffic scenario and behavior of the vehicle using dedicated models for each domain. The CarSim vehicle model simulates motion of the car in response to control inputs; like braking, steering and suspension, as well as real-world conditions, like slick or bumpy roads.

Since vehicle motion is so complex — 30,000 individual parts go into a single physical car — simulating it effectively requires a high-fidelity model. This ensures the tests performed in the virtual world accurately replicate real-world conditions.

Companies have been developing ways to test vehicle dynamics for years, including simulation. Because of the complexity of these vehicle models, automakers and Tier 1 suppliers have invested heavily in developing and validating their models.

With CarSim and TruckSim available on DRIVE Constellation, automakers and Tier 1s can get even more value out of their models by using them for autonomous vehicle testing.

Automakers worldwide are already using these models to validate vehicle technology. With DRIVE Constellation, they can test it in a hardware-in-the-loop platform at scale.

dSPACE will work with Microsoft to provide mature and proven end-to-end solutions for the development of advanced driver assistance and autonomous driving systems.
dSPACE
December 16, 2020
Follow Us