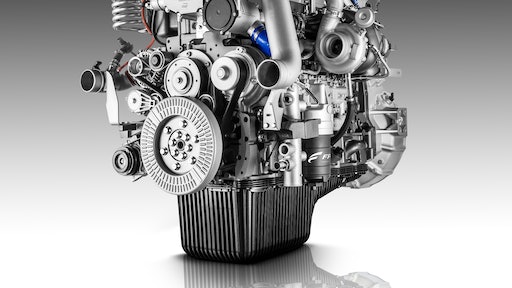 On October 30, FPT Industrial introduced its latest natural gas (NG) engine, the Cursor 13 NG. With the introduction of this engine, the company is now able to offer natural gas engines which cover all power ranges for on-road applications.

Annalisa Stupenengo, FPT Industrial Brand President, said during the launch of the engine that natural gas engine development is a pillar of the company’s sustainability policies. She says this is due to natural gas being a clean fuel which “produces benefits for the environment now, not tomorrow.” It is also a well tested, proven technology ready for use in the marketplace. “[It is] an economical, viable, low emission engine solution in terms of cost of fuel, autonomy range and reliability,” she said.

Oscar Baroncelli, FPT Industrial Product Marketing Manager, added that while it is a fossil fuel, natural gas can be made from renewable sources, and has the lowest greenhouse impact of all internal combustion engine fuels. Particulate and NOx (nitrogen oxides) are lower than other fuels, as well, because natural gas has a higher hydrogen to carbon ratio. The higher the hydrogen to carbon ratio, the lower the carbon dioxide (CO2) generated during combustion, he explained.

The CO2 rate of a natural gas engine is 9-10% lower than a Euro VI diesel engine of equivalent performance. When powered by renewable biomethane, the engine achieves near-zero CO2 emissions. Baroncelli noted this is a unique feature of the Cursor 13 NG because not all natural gas engines are fully biomethane compatible. “At FPT Industrial, we believe in the potential of natural gas” which is why he said the company continues to innovate and develop its natural gas engine offering.

In addition, the engine is ahead of current emissions requirements as it reduces particulate matter 90% and reduces NOx by 48%.

Pierpaolo Biffali, FPT Industrial Head of Product Engineering, said that when developing the Cursor 13 NG diesel-like performance was the benchmark. “To make natural gas appealing, we needed to provide performance, reliability and total cost of ownership equivalent to diesel, or possibly better,” he said.

To do so, the company chose to use a spark ignition, stoichiometric cycle combustion process versus the typical compression ignition used by diesel engines. The key reason for this, said Biffali, is the fact the stoichiometric cycle is able to work with gas only while the alternative requires a certain amount of diesel to be mixed into the fuel. Operating on a single fuel means just one storage tank is necessary onboard the vehicle—helping to save space—and a single emission technology can be utilized.

While a diesel engine typically needs an aftertreatment system consisting of an EGR (exhaust gas recirculation), DPF (diesel particulate filter) and SCR (selective catalytic reduction), use of the stoichiometric cycle for the Cursor 13 NG allows just a three-way catalyst to be utilized for emissions control. “[This] translates to compactness, lightness and simplicity of the system,” said Biffali. “And for a long-distance vehicle, a compact package means more room for the gas tank and more range autonomy.” A lighter system also equates to increased payload for the truck, while the reduced complexity of the single-technology system eases maintenance.

Biffali noted that although the stoichiometric cycle offers many benefits, there were challenges to overcome, as well, when developing the engine. The first was temperature management as natural gas burns at a higher temperature than diesel when using the stoichiometric cycle. To overcome this, he said FPT conducted intensive research and development efforts into various materials and design solutions. The company determined use of a Nickel-Resist cast iron alloy for the exhaust manifold, and water cooled steel tube turbocharger would meet the high temperature requirements of the combustion cycle.

A compact graphite iron material was chosen for the engine’s cylinder head to increase reliability and durability as it allows heat to be released from the combustion chamber.

Further engineering effort was put toward three-way catalyst, said Biffali, with a focus on decreasing size and using closed loop control to ensure catalyst efficiency. The closed loop control enables the catalyst to always operate in a narrow air-to-fuel ratio; in addition, the temperature of the system is continuously monitored to prevent the catalyst from suffering any internal stress.

Combustion optimization was the third and most important focus when developing the Cursor 13 NG, said Biffali. “We adopted for the Cursor 13 NG a multipoint injection to supply all the cylinders with an even distribution of air-to-fuel mixture among all cylinders,” he explained. “And to respond to requests for more power, we have introduced fuel injectors to manage the high fuel flow rate the engine is requesting.” The fuel injectors allow high performance while at the same time optimizing fuel consumption.

Combustion management was achieved through the pairing of the engine with the transmission system. While providing smooth and timely gear changes for improved driver comfort, the integration of the automated manual transmission (AMT)—also developed by FPT—enables fuel savings. “The perfect integration between the automated gearbox and the engine is guaranteed by a dedicated stoichiometric ratio control method that was developed in house which focuses on gearshift transients,” said Biffali. “This is a new reactive airflow control management that ensures continuous torque delivery when shifting from gear to gear.” By coupling with the AMT gearshifting, performance is maximized and faster gear shifts are achieved.

As engine upkeep is often an issue associated with combustion engines utilizing a stoichiometric cycle, Biffali said FPT developed a new system which can detect and prevent misfire through a cycle-by-cycle combustion adjustment. It does not require the use of a dedicated NOx sensor, and is similar in design to systems used in high performance cars and racecars.

With the introduction of the Cursor 13 NG, Baroncelli concluded that FPT now has a complete gas engine lineup. “We have three product families and five models in our product offering that covers all the power ranges from 136-460 hp, and suits over the road and international motorways.”