Waterless coolant offers fuel economy and no downtime due to overheating. 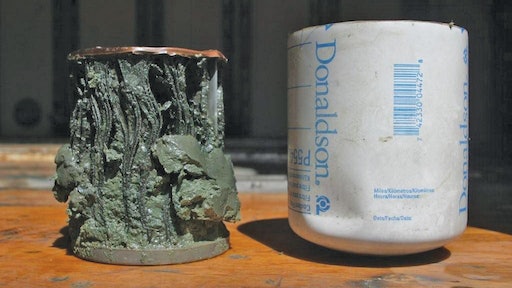 OEMs are spending large sums of money in order to meet the continually tightening regulations in regards to fuel consumption and emissions reduction. The sheer size of equipment on top of high productivity demands causes frequent overheating – sometimes daily depending on the conditions.

Evans Cooling Systems Inc., Sharon, CT, offers a coolant without water which allows equipment to run hotter due to a boiling point of 375 F (190 C) versus water’s boiling temperature of 212 F (100 C).

The coolant is a liquid blend of glycols with soluble additives. Its freezing point is lower than that of water at around -60 F (-51 C), exceeding water’s capabilities at both ends of the temperature spectrum.  Evans waterless coolant never has to be replaced, as long as it is never contaminated with water, and is nontoxic.

Recent emissions testing with Emisstar showed a decrease of carbon emissions (CO2) by over 2%. Further testing is underway for NOx.

A lot of people don’t associate coolants with fuel economy. “The coolant itself doesn’t save fuel, but it allows fuel saving strategies that you can’t do with a water-based coolant,” says Mike Tourville, Director of Marketing, Evans Cooling Systems. “We call it an enabler. With the higher boiling point, equipment thermostats can be increased slightly, for example up to 205 F (96 C), and the fan-on temperature can be increased to 230 F (110 C) which reduces the amount of time a fan will turn on and run to cool down the equipment.” Since the fan system requires fuel and power to run, reducing the fan on time also reduces unnecessary power and fuel consumption, lowering emissions and improving fuel economy.

Other systems are durable enough to allow for the higher temperatures, as the temperature is only slightly higher, and still well below the threshold for adverse effects on the oil system or hoses and gaskets.

Veolia Environmental Services, a waste management company, saw fuel economy savings of over 4% during a year-long test of the waterless coolant in Sheboygan, WI. The company is currently testing vehicles in Florida and is again seeing a significant fuel savings.

“In every test we’ve done, we’ve gotten some fuel economy savings, usually between 3% and 8%. It’s a simple way to get better fuel economy – change your coolant, and take advantage of a reserve capacity your engine already has in order to run more efficiently” he says. “There are a lot of other options to improve fuel economy, but the return on the investment is sometimes years; we’re usually seeing customers earn their money back within six months.”

Inherently, by removing the corrosive element, water, corrosion and electrolysis are avoided. Without water, there is also no fear of water vapor which can cause pressure in the system. Normally cooling systems are pressurized with a 10- to 15-lb. pressure cap (each pound of pressure increases the boiling point three degrees), “so a 15-lb. cap would raise the boiling point to 257 F, which is still not a wide enough margin between the operating temperature and the boiling point. With our coolant, we don’t form vapor in an engine because we don’t boil,” Tourville says.

Additionally, water vapor pockets caused by boiling coolant interrupts efficient heat transfer throughout the cooling system because vapor only retains 4% of the thermal conductivity of water. At its most basic, eliminating vapor and thus system pressure is a valuable safety benefit to owners and equipment operators.

Overall stress on the system is not an issue, and routine maintenance of hoses and gaskets that are normally subjected to higher pressure systems is less frequent, as are leaks. “We can’t prevent leaks, but we can make them less likely to occur,” says Tourville.  On top of routine maintenance intervals extending, the coolant itself is a lifetime coolant. Not only does it not need to be replaced, but since it does not evaporate, also will not need to be topped off.

Abrasion can be another common problem with coolants because of additive deposits that bake onto the cooling system forming a type of insulating barrier between the coolant and the metal disallowing efficient heat transfer. Evans waterless coolant does not have abrasive additive deposits and instead has a cleansing effect on the system that erodes old baked on deposits and flushes out the system. “You don’t have to add the typical supplemental coolant additives (SCAs),” Tourville claims.

There is a John Deere Engine Cavitation Test which is now an ASTM (formerly known as the American Society for Testing and Materials) standard. The test measures how many pits occur over 250 hours. In April of 2009, Evans Cooling Systems took its heavy-duty thermal coolant (HDTC) to the Southwest Research Institute in San Antonio, TX, and came out with a pit count of 21 compared to other coolants which average around 200 pit counts. “The results were 70% better than any other water-based coolant tested,” confirms Tourville.

Overheating can cause significant, costly unplanned downtime, so system reliability is key. One such example is Qiang Xu, the company’s agent in China who converted a truck working a railroad project high in the Kunlun Mountains that was experiencing frequent downtime to cool off. After the conversion, there were no boil-over occurrences despite driving full loads at an elevation of 16,000 feet.

Another example of improved performance was for the First Sergeant at the Balad Airbase near Baghdad for its generators. The generators were automatically shutting down at 225 F and required a minimum of a 20-minute cool-down before they would start up again. An Evans Coolant was installed and the 225 F thermostats were replaced with 250 F thermostats allowing longer uptime and consistent electricity.

Evans Cooling Systems’ prototype coolant was installed into a Class 8 truck in 1990, and is still in use today. For the truck’s entire history, it has had 215 F thermostats and a 230 F fan-on switch. At nearly one million miles, the truck’s owner Joe Umstead reported the truck is still running today with its original cylinder liners, pistons and valves intact.

Water has been the choice for cooling systems for over 100 years and has provided an excellent medium to transfer heat, if you keep it in its liquid state. All of today’s Truck manufacturers use giant radiators, amazingly powerful radiator fans, and high system pressures to keep the water in their cooling system beneath the boiling point of water for the pressure of the system. In many ways this is a huge waste of energy that could be better served if the OEM’s did not have to contend with the limitations of water- based coolants.

Capvis Equity has acquired majority ownership of Thermamax, which will help position the company for even further growth in the future.
Thermamax GmbH
August 24, 2017

Thermamax Inc. is celebrating 10 years of business in the U.S., and further expanded its facility in Aurora to enable production of the company's entire product portfolio.
Thermamax GmbH
August 18, 2017

BorgWarner has introduced a family of four EGR coolers for a range of engine sizes with 2.0-16.0 L displacement.
BorgWarner Inc.
August 1, 2017

Dirk Balthasar has been named the new President of Thermamax Inc., and will be responsible for future development of the company.
Thermamax GmbH
July 7, 2017

At MINExpo, AKG will introduce its HD Series oil cooler, as well as its MCS Series cooler for use with engines operating at 1,500-5,000 hp.
AKG of America
September 22, 2016

Modine kicked off year-long celebrations for its 100th anniversary with a global flag-raising event at its headquarters in Racine, WI.
Modine Manufacturing Company
January 26, 2016
Engines

Juliana Van Winkle and Brittany Gianesini of Modine are recipients of STEP Ahead awards from the Manufacturing Institute recognizing women of excellence in manufacturing.
Modine Manufacturing Company
March 11, 2015
Follow Us