DEUTZ will exhibit several of its engines including the TCD 5.0 EU Stage V engine which will be introduced worldwide in 2019. 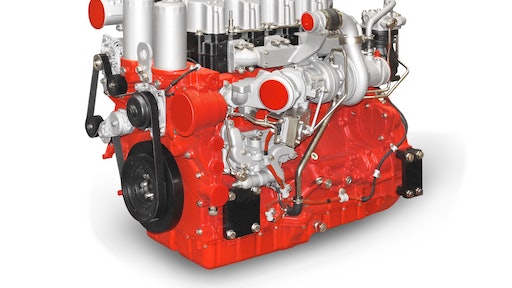 From March 7-11, DEUTZ will be at CONEXPO 2017 in Las Vegas to present its expanded engine portfolio, now ranging from cubic capacities of 2.2-18.0 L. Under the slogan ‘FUTURE DRIVEN – engine technology for tomorrow’, DEUTZ will be showing several new gas and diesel engines. These engines will all be shown together for the first time in the USA.

Every 3 years, construction equipment manufacturers from around the world gather at CONEXPO in the Las Vegas Convention Center, a venue which offers some 200,000 sq. m of exhibition space in the heart of the entertainment metropolis in the Nevada desert.

This year DEUTZ will occupy a 220 sq. m booth (South Hall, S85230) where the American market will see the company’s new four-cylinder TCD 5.0 and TCD 9.0 diesel engines and the six-cylinder TCD 12.0, TCD 13.5 and TCD 18.0. The diesel and gas versions of the new three-cylinder TCD 2.2 and the gas variant of the well-proven four-cylinder TCD 2.9 will also be on display.

The DEUTZ TCD 5.0 will be introduced worldwide in 2019 to meet the next EU Stage V emissions standard. The engine will also comply with US Tier 4 Final. This particularly compact turbocharged and charge air cooled 5 L cubic capacity diesel generates 100-150 kW (135-200 hp) and 890 Nm of torque. The engine also conforms to the downsizing principle, by producing more power from a smaller cubic capacity, enabling customers to replace larger displacement engines with a more fuel efficient compact four- cylinder engine. The TCD 5.0 is a brand new design; minimum pipework and fewer components are some stand-out features.

Another DEUTZ highlight at Las Vegas is the new TCD 9.0. This 9 L cubic capacity four-cylinder diesel engine generates 200-300 kW (300-400 hp) and 1,700 Nm of torque. Its highly compact design makes it easy to install in a wide variety of applications, excavators and wheel loaders in particular.

All four engines (TCD 9.0 – 18.0) are the product of a collaborative partnership with the Liebherr Group. DEUTZ plans to market under its own brand name the engines manufactured by Liebherr and from 2019 plans to make them available via the worldwide DEUTZ dealership and service network for the EU Stage V, US Tier 4 Final, China IV and EU Stage IIIA emissions standards.

As Robert T. Mann, President & CEO of the DEUTZ Corporation (USA), explains, “The expansion of our engine portfolio allows us to pursue new markets and expand our customer base. The TCD 5.0 enhances the strategically important range between 100 and 150 kW (135 to 200 hp); in future, our TCD 9.0 to 18.0 family will offer powerful four- and six-cylinder engines for heavy-duty applications.”

DEUTZ is not only expanding the upper end of its power range, three new engines, covering the lower power range, are also being presented. Generating up to 56 kW (75 hp), the TCD 2.2, the three-cylinder variant of the successful four-cylinder TCD 2.9, will represent a further option, particularly in the material handling and compact construction equipment. DEUTZ is also introducing two liquefied petroleum gas versions (also known as LPG) of the TCD 2.2 and the TCD 2.9. The engines are designated G 2.2 and G 2.9 and are especially suitable for forklift trucks, industrial, stationary and compact construction equipment.

The new DEUTZ Smart EAT system will also be exhibited at the show. With this exhaust aftertreatment solution, the DOC, the DPF and the SCR (including the dosing unit) are all housed in a so-called single unit, i.e. the entire exhaust aftertreatment technology is integrated extremely compactly into one component. Customers benefit by gaining additional installation space in their equipment. If required, the SCR system and the DOC/DPF unit can also be installed as a flexible modular unit to efficiently use the available space.

In addition to its new engines, DEUTZ will be featuring its extensive range of services which now includes a powerpack for the popular TCD 3.6. The powerpack is supplied ready for assembly with cooling system attached. Also among the services available is the range of DEUTZ Xchange products. These are professionally reconditioned engines and components which represent a quick, economic and eco-friendly alternative to purchasing a new engine.

The small off-road engine market will be driven by government regulations for emissions reductions and continued improvements in fuel efficiency.
September 28, 2020
Follow Us