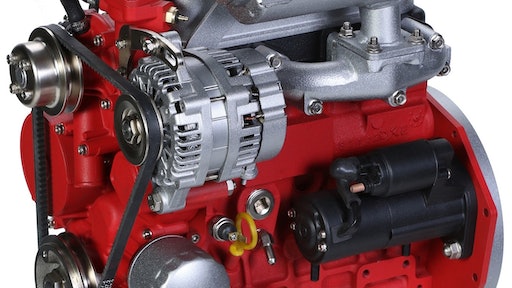 The DEUTZ D1.2 engine is part of the company's under-25-hp range of engines.

DEUTZ Corporation will exhibit its growing, versatile line of engines at the upcoming International Construction & Utility Equipment Exposition (ICUEE) on October 1-3, 2019 at the Kentucky Exposition Center in Louisville. While every show that DEUTZ attends is important, company representatives look forward to the biennial ICUEE for numerous reasons.

“Like our other industry shows, ICUEE provides us with the invaluable opportunity to visit with attendees one on one,” says Steve Corley, Chief Sales Officer for DEUTZ Corporation. “However, at ICUEE, we also get the chance to see many of our OEM partners, who are exhibiting DEUTZ-powered equipment at their own booths. It’s great to be able to talk to them about how our power solutions are working for their customers and get their feedback.”

This year, at ICUEE booth #3452 in the convention center’s South Hall Wing, DEUTZ plans to showcase two new engine models for the North American market: the D1.2 model from the company’s under-25-hp range and the TCD 2.2 L3 model, a robust design for demanding industrial applications based on the successful TCD 2.9 series.

The D1.2 is designed to better meet the growing number of customers who want to efficiently power machines like aerial platforms, welders, trenching equipment and mini skid-steer loaders, as well as equipment for lawn and garden and pump applications. The TCD 2.2 L3 uses a DVERT oxidation catalyst (DOC) that enables maintenance-free operation under all application and ambient conditions for Tier 4. All DEUTZ 75 hp TCD engines are able to provide high levels of torque that compensate for their lower horsepower, which is particularly useful for load-lifting machines like telescopic handlers.

Other products on display at the DEUTZ booth will include the TCD 2.9, TD 3.6 Power Pack, TCD 4.1 and a DEUTZ Xchange remanufactured engine.

“We developed the D1.2 and the TCD 2.2 L3 as engines as unique solutions for two rapidly expanding equipment categories,” says Robert Mann, DEUTZ Corporation president and CEO. “While we’re pleased to introduce those new engines, we’re also proud all the power solutions we’ll have on display. Our booth reflects our commitment to the future, spotlighting our DEUTZ Genuine Parts and Fluids, our exhaust treatment technology and our E-DEUTZ hybrid engines. We hope everyone will come out to visit with us and learn more about what the future has in store at DEUTZ.”

MTS chose to integrate the Cat C18 engine which features a flexible aftertreatment solution allowing a redesign of the tractor cab and improved visibility.
November 10, 2020
Follow Us