Electrification and other techniques for emissions compliance and efficiency gains are changing the performance needs of powertrain lubricants. 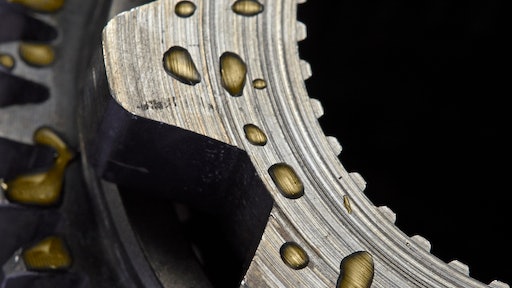 “To achieve this, the lubricant must be matched to the hardware – any old lubricant won’t do, especially as engine and transmission technology grows in sophistication,” she says. “If an incorrect or substandard lubricant is used, it can shorten hardware life leading to costly repairs, prevent the vehicle from working properly, or working at all, and in some cases, could lead to irreparable damage.”

Because of this, it is important for manufacturers and lubricant formulators to collaborate early on in the development process. Doing so ensures they will develop a system that works well together and avoids potentially costly issues in the field.

As powertrain technology continues to advance due to emissions regulations and increasing electrification, early collaboration has become even more important to ensure lubricants perform as they should in the evolving system designs.

“As the fluid gets thinner, it flows more easily through the engine and transmission. This reduction in viscosity improves the overall efficiency of the transmission,” explains Norman. However, she says it’s important to formulate the lubricant so that it still provides the protection necessary for the application.

Granger notes that engine oil performs many functions; one of the most important is keeping engine pistons and piston rings clean. “In the diesel combustion process there’s some really high combustion pressures and temperatures that are a result of the combustion process,” he says. “As they strive to [design] more fuel efficient engines, and clean[er] burning engines, those temperatures and pressures are going up. As a result, the pistons can run hotter and when [that happens] that can be more demanding on the oil.”

The oil needs to keep the pistons and piston rings as clean as possible to ensure they last the life of the engine. Because of this, a lubricant formulator like Shell needs to be cognizant of any changes a manufacturer might make to increase engine efficiency. Older oils will likely not work as well due to the engines running at hotter temperatures. Granger says development of products like Shell Rotella have a lot of additives built in to keep the pistons and piston rings clean over the entire life of the engine.

To keep up with changing engine designs and needs—such as extended oil drain intervals—Granger says next generation oils are now formulated to be more oxidation resistant and able to handle higher temperatures for longer periods of time.

Granger says when developing its next generation products, Shell will often work with engine manufacturers as they also develop their latest product. Tests are run on prototypes, sometimes evaluating just one aspect of a lubricant, such as viscosity, to see how the products may work together. Changes are then made or other features added to further test and evaluate compatibility.

Early collaboration with manufacturers not only ensures an engine and oil will work together, but also that the right oil will be available for customers once the new engine hits the marketplace.

Introduction of more electronic componentry in today’s vehicle and equipment designs has brought about the need to re-evaluate the lubricants used. Norman says the higher voltages and increased use of copper wire in electrified systems increases the potential for corrosion. Electrical conductivity of the lubricant is also a concern as it could contribute to the risk of shock through the transmission or axle housing.

The speed at which electric motors operate continues to increase, as well, causing more heat to be generated and the chosen lubricant to be capable of efficiently managing that heat while also ensuring harmful deposits do not form which could cause hardware damage.

Granger notes electrified systems have introduced more copper into the lubricant, requiring it to be able to work in a copper-filled environment. “As oils age they can generate oxidative products which can be acidic, and we have to be sure when the oils age they can still protect components,” he explains.

How these challenges are overcome varies. Granger says in the case of increased conductivity, changing the type of additives in the lubricant can be beneficial.

Materials used in a system and their compatibility with a lubricant should be a key consideration for manufacturers. “If the lubricant and materials used are not compatible we could see corrosion, degradation of materials, leakage and shift issues such as shudder (jerky shifting), and noise,” says Norman.

Norman says a lubricant formulator can provide guidance on material choice and lubricant to ensure an OEM achieves its performance targets. “This collaboration will help the manufacturer to create a system that delivers the desired performance while optimizing efficiency and hardware longevity.”

In addition, collaboration with lubricant experts helps to ensure the appropriate tests are conducted to evaluate system fluid and hardware performance in areas which will help reduce risk of failure in the field.

When diesel particulate filters (DPF) were first being developed, Norman says vehicle manufacturers worked closely with lubricant formulators to ensure efficient operation. “Certain additive chemistries can cause deposits to form in the DPF which restrict exhaust flow,” she explains. “In turn this increases exhaust back pressure, reduces fuel economy, shortens the useful life of the DPF, and can cause severe engine damage.

“By working together in advance of DPF deployment, a formulation architecture was developed which was less prone to deposit formation. This style of lubricant maintains proper exhaust flow,” she says. “Without this synergistic development DPFs would have needed to be oversized and costlier.”

Norman says that today’s hybrid transmissions have been designed to work with existing fluids. However, as they continue to evolve there will be opportunities to enable enhancements through the use of fluids specifically optimized for the new designs. “By developing the hardware and lubricant in tandem, we will see more efficient systems leading to better vehicle performance and fuel economy.”

She says Lubrizol has developed lubricants which specifically address the technical challenges anticipated with future hybrid and electric drivetrains. “These lubricant technologies will be able to provide performance in electrical compatibility, at extremely low viscosities, in an operating environment of sustained high temperature and potentially high speeds.

“In some areas existing performance criteria may need to be adapted, for example enhanced bearing protection and heat transfer for higher speed electric motors along with stronger foam suppression for the increasingly thinner fluids,” she says. “The increased use of copper components and alloys will also drive more attention to copper corrosion performance and test methods, and improved copper corrosion. In other areas, we have entirely new performance requirements such as conductivity targets and compatibility with polymeric materials of construction.”

As OEMs adopt an electrification strategy and other techniques to improve overall vehicle efficiency, a lubricant that is designed and optimized as part of the system will enable and ensure the hardware performs at its optimum condition, thereby enabling efficiency.

Environmental Protection is a Driving Force for Change

A new report from Smithers Apex says the lubricant industry will need to change its business models for the 470 million electric vehicles expected on roadways by 2029.
July 2, 2019
Engine Oil

The new standards are designed to provide greater protection and fuel efficiency for gasoline-engine-powered vehicles.
June 6, 2019

LiuGong intends to complete three kinds of graphene-modified lubricants in 2 years and achieve application of the lubricants in its construction equipment products in 5 years.
LiuGong Machinery Corp.
July 9, 2018
Engine Oil

FPT's study which received the award focused on the challenges of introducing API CJ-4 oil in Latin America, as well as the potential benefits it could offer.
CNH Industrial N.V.
June 20, 2017