An Emissions Versus Efficiency Resolution

Fuel injector technology bridges the conflict between an engine’s performance and the industry’s quest for emissions reduction. 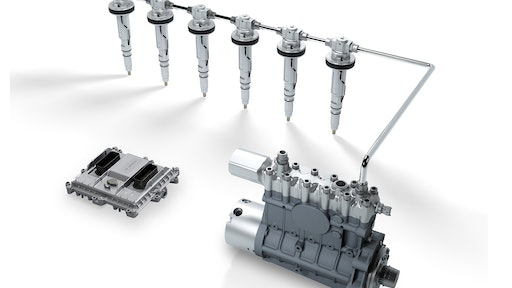 In the ever-present pursuit of emissions reduction – and beyond appended aftertreatment devices – fuel injectors and high pressure common rail (HPCR) fuel injection systems have become a controllable parameter (via electronics) for fuel efficiency. “Fuel injector performance can significantly ease the conflict between emission[s] reduction on the one hand side and engine efficiency and power density on the other side,” says Dr. Andreas Lingens, Managing Director, L’Orange GmbH. “Better injector performance, of course supplemented by adaptions to the air and exhaust management system, ultimately increases efficiency and power density at a prescribed emission level.”

In brief, “on a diesel engine, fuel injectors add fuel at a high pressure into the combustion chamber near the end of the compression cycle when the air reaches very high temperatures and pressures. This atomizes the liquid fuel into a fine spray, which contributes to a clean, efficient combustion,” explains Daniel A. Nehmer, Technical Lead for Fuel Systems at John Deere Power Systems.

The introduction of electronic controls ushered in a new era of engine efficiency for fuel injection systems, which were previously mechanical in nature with fixed injection times which resulted in low injection pressures. Engine calibrators can schedule injection events that will optimize fuel and air mixing in the combustion chamber, resulting in higher fuel efficiency than was able to be achieved with earlier systems. “Now, these systems are highly refined and produce high injection pressures,” says Nehmer. “Modern systems can inject fuels at different and multiple intervals for each combustion cycle – it’s even possible to reach five or more injection events.”

With electronics being able to control the beginning and end of an injection event – or perhaps more importantly multiple injection events – as well as the quantity per injection and diagnostic features, an engine system is able to achieve results like higher emissions performance, lifetime stability and time between overhauls.

Since its first introduction in 1997, the common rail system has been incorporated into nearly all diesel engines, and can be considered the fuel systems industry standard, according to Dr. Lingens. “Throughout this period, injection pressures increased from ~1,200 bar (17,400 psi) to 2,500 bar (36,000 psi) in the latest generation systems,” he says.

The advent of the HPCR fuel system introduced programmable injection pressure, multiple injection events and variable injection timing. These systems are always pressurized – designed to store high pressure fuel and deliver it to the combustion chamber at programmed parameters triggered by the engine electronic control unit (ECU) – versus previous systems which were only pressurized during the injection event.

“Original mechanical systems were only capable of single injection events on a fixed schedule with low injection pressures,” says Nehmer. “The introduction of HPCR…helps meet modern fuel economy and emissions standards. The HPCR’s flexibility also makes it easier to use EGR for emissions control, as well as generate calibrations that can better tolerate variations in fuels and operating conditions required by modern vehicles.”

And beyond the functional benefits over the previous cam-driven systems, common rail technology allows for a simpler base engine design, removing the need for a fuel pump per cylinder and the cam drive. “Different performance levels of common rail systems may be used on the same engine with minimum design impact,” says Dr. Lingens. “Overall, it is the more cost-efficient solution.”

The higher pressures help to reduce CO2 emissions, and the injector design evolved to a zero permanent leakage design and very low control leakages in order to further improve the engine’s efficiency.

Even with all of its performance and feature benefits, modern HPCR fuel systems have limitations when compared to the previous systems. At the higher injection pressures over 2,500 bar, performance gains are small compared to the increased cost to accomplish them.

Over 2,500 bar, “we are definitely at the limit of design optimization material strength, and manufacturing technology,” says Dr. Lingens. “Stability of our manufacturing process is vital. Stability over lifetime is the other limitation where we push the boundaries via new designs and adaptive or controls functionality.”

The future of fuel injector design will continue to miniaturize the design while increasing pressures and reducing leakage. “HPCR fuel systems are currently the most common choice for modern diesel engines — a trend we expect to continue for the foreseeable future,” says Nehmer. “As countries adopt the emissions standards of Europe and the United States, even more engines will be modernized, likely ushering in the addition of HPCR.”