L'Orange has produced its one millionth injector which was made for an MTU Series 4000 engine at the company's Black Forest production facility. 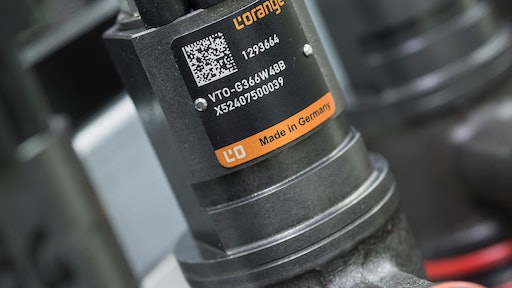 L’Orange, the large engine injection systems specialist and Rolls-Royce Power Systems company, has produced its one millionth injector. The diesel injector for an MTU Series 4000 engine was made at the company's Black Forest production facility in Glatten. L’Orange products featuring common rail technology have been a big success around the world for almost 20 years and set standards for others to follow.

The common rail injector is among the most reliable high-tech components in a large diesel engine and helps improve performance, fuel consumption and emissions. At 1,000 injections per minute, each with a volume of 800 mm³ of diesel fuel, the one million L’Orange injectors have injected a total of 300 billion liters of diesel and use significantly less fuel than traditional injection systems.

“When the injector was being designed in 1996, we catered for the ability to allow customers to adapt the product to suit their various engines. As a result, the injector can be scaled and adapted for a variety of specifications and applications. This is a valuable characteristic and one which has put us at the forefront of the global market. It shows how important our strategic decision in favor of common rail technology was at the time,” emphasizes Dr. Ralph-Michael Schmidt, CEO of L‘Orange GmbH. Since going into production, the development focus has been on improving precision and resilience of the injector with an eye to atomizing the fuel into ever-smaller particles. This improves engine performance and is kinder to the environment. L’Orange injectors are used in engine applications such as those on fast ferries and yachts, working boats, locomotives, electricity generators and in the world's largest haul trucks.

As well as improving the injectors, expansion of production is also key to global success. The new production bay in Glatten, built in 2009, was a significant enlargement of L’Orange's manufacturing facilities. Since then, almost all stages of the injector manufacturing process are undertaken in this dedicated bay. “Injector production has doubled every five years since 2001. As a result, the whole environment has needed to evolve as we go along. We currently have over 200 employees in injector manufacturing, be it in assembly, quality assurance or individual component production,” explained Schmidt when asked about the importance of injectors to the company.

The workforce presented Schmidt with the one millionth injector at a ceremony in the injector bay in Glatten to mark the occasion on December 7, 2015.

An Emissions Versus Efficiency Resolution