The EPA has issued a ruling allowing non-compliant 2012 and 2013 engines to be penalized approximately $1,900 per engine.

The Environmental Protection Agency (EPA) issued an interim rule (IR) to make nonconformance penalties (NCP's) available to manufacturers of heavy-duty diesel engines in model years 2012 and 2013 for emissions of oxides of nitrogen (NOX). The penalty would be approximately $1,900 per engine and could increase over time.

This rule is being issued in response to concerns about the continued availability of International Truck engines while they pursue the certification process for an engine that will comply with the 2010 requirements. Engine manufacturers can meet the current EPA requirements with non-compliant engines if they have previously earned credits by selling engines that surpassed the emissions requirements in place at the time of sale.

International Truck has pursued a different engine emission technology than other manufacturers and been using banked credits to meet the 2010 requirements. The possibility exists that those credits could run out before a new engine has been certified as compliant. This IR will allow International to continue producing vehicles, at a penalty, while they pursue the EPA certification process.

In general, the availability of NCPs allows a manufacturer of heavy-duty engines whose engines fail to conform to specified applicable emission standards, but do not exceed a designated upper limit, to be issued a certificate of conformity upon payment of a monetary penalty to the United States Government. The upper limit associated with these NCPs is 0.50 grams of NOX per horsepower-hour.

California presents another set of concerns. California has its own emissions regulations that do not allow for the sale of non-compliant engines once the banked emissions credits run out. Further, they do not have the statutory authority to create a penalty system as did the EPA. It appears at this time that that the only option for the continued sale of non-compliant engines in California may be to pursue emergency legislative relief. 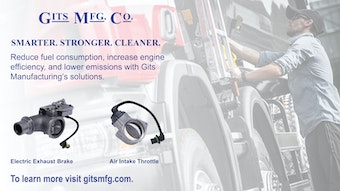 The company says its engines will meet the high emissions standards being put in place for heavy-duty off-road engines with power ratings up to 560 kW.
Kohler Co.
March 19, 2021
Follow Us