Cummins' QSB6.7 Engine Will Use CCC-SCR to Meet Emissions and Improve Fuel Efficiency 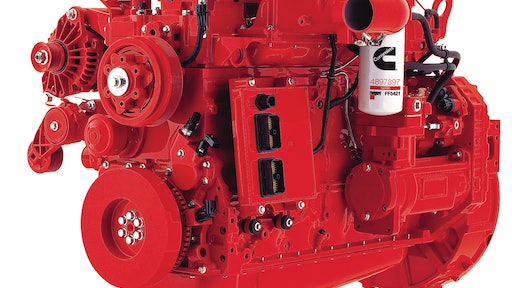 Cummins Inc. will feature the QSB6.7 engine, with up to 231 kW (310 hp) output, at INTERMAT 2012 (Paris, April 16 to 21). The engine is ready to meet EU Stage IV and EPA Tier 4 Final near-zero emissions in 2011 with a next generation Cummins Compact Catalyst and Selective Catalytic Reduction (CCC-SCR) aftertreatment system.

As one of the most popular six-cylinder engines used by the construction industry, the 6.7-litre engine will be a key focus of attention at the Cummins booth MO27, Hall 5B.

The QSB6.7 achieves a highest ever power output for Stage IV and Tier 4 Final, with 231 kW (310 hp) peak power at 2,200 rpm and over 1,000 Nm peak torque. A broad range of ratings are available down to 109 kW (146 hp). The QSB6.7 makes no performance compromises to meet near-zero emissions, retaining the faster engine response and reliability proven by the current Stage IIIB and Tier 4 Interim engine.

The CCC-SCR aftertreatment provides a fully passive, flow through operation and also enables the QSB6.7 to further improve fuel efficiency over the current engine. At 2011 emissions levels, the QSB6.7 engine is capable of achieving up to 5% improved fuel efficiency, depending on duty cycle and machine optimization. With the CCC-SCR system, fuel efficiency can be further increased for 2014 Stage IV and Tier 4 Final by an additional 3%.

At Stage IIIB and Tier 4 Interim, this space-saving advantage has been especially important for four-cylinder engine applications – but looking ahead to Stage IV and Tier 4 Final, the need to minimize space claim moves beyond this to the six-cylinder 6.7-liter and nine-liter platforms.

The QSB6.7 to be displayed at INTERMAT ready for Stage IV and Tier 4 Final emissions in 2014 is almost identical to the engine introduced to meet the 2011 Stage IIIB and Tier 4 Interim regulations. This ability to move forward to meet the near-zero emissions standards is pre-designed into the existing engine platform, with no significant change required for engine systems or installation profile.

To meet Stage IV and Tier 4 Final, particulate matter (PM) reduces to 0.02 g/kW-hr and Oxides of Nitrogen (NOx) reduce to 0.40 g/kW-hr. Compared to Stage IIIA and Tier 3 emissions levels, this represents a 90% reduction for both PM and NOx.

The next generation CCC-SCR system will be utilized by Cummins four-cylinder engines, the QSB6.7 and the QSL9 engine to offer a common aftertreatment solution from 56 kW to 298 kW (75 hp to 400 hp) with modular sizing.

The SCR system is a next-generation design incorporating a copper zeolite-based catalyst capable of up to 95% NOx conversion and able to operate more efficiently at lower temperatures. The system features advanced sensors to provide full closed-loop control. AdBlue diesel exhaust fluid dosing levels are minimized due to an enhanced mixing technique.

The CCC achieves efficient PM reduction with a catalytic coating, substrate and sizing that are uniquely tailored for the Cummins engine platform. By passively oxidizing PM from the exhaust stream, the CCC is a maintenance-free "fit and forget" device offering an inherent operational simplicity.

The CCC-SCR aftertreatment will be available in multiple configurations, including switchback, horizontal and vertical. Cummins Direct Flow air cleaner technology brings a further installation advantage with a smaller profile than typical cylindrical cleaners, together with the benefit of extended service change intervals.