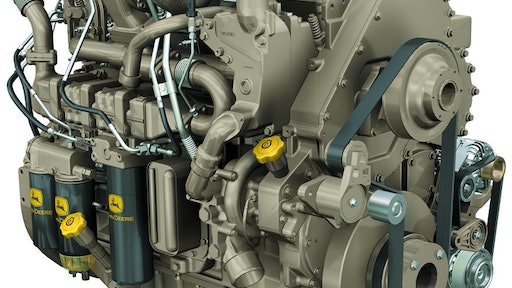 “The certification of our 13.5L engine means that the complete lineup of JDPS engines above 130 kW (174 hp) has achieved regulatory approval,” says Doug Laudick, product planning manager for JDPS. “By becoming one of the first off-highway diesel engine manufacturers to certify all of their engines in the power range, we demonstrated our market leadership and commitment to the environment. Not only does our certified Interim Tier 4 engine lineup offer OEMs the right emissions-reduction technology right now, it also delivers our customary performance, reliability, durability and low operating costs.”

Interim Tier 4/Stage III B emissions regulations began January 1, 2011, for 130 kW (174 hp) and above engines and require a 90% reduction in diesel particulate matter (PM) and a 50% reduction in nitrogen oxide (NOx) from previous Tier 3/Stage III A requirements.

“Certification of our Interim Tier 4/Stage III B engines above 130 kW (174 hp) is a testament to the quality of our field and lab testing processes,” Laudick says. “JDPS accumulated an immense number of testing hours to ensure that the final products would meet the unique demands of off-highway applications as well as challenging emissions regulations.”

In choosing a solution for Interim Tier 4/Stage III B, John Deere elected not to use selective catalytic reduction (SCR). John Deere’s cooled EGR and exhaust filter approach provides OEMs and end users a solution with total fluid economy. The single-fluid approach of cooled EGR means owners and operators won’t have to incur the cost of diesel fuel plus the additional cost for diesel exhaust fluid (DEF) required by SCR systems.