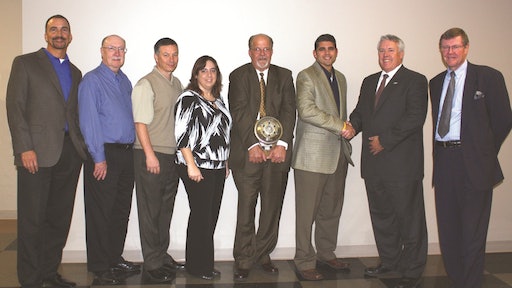 Horton’s Britton, SD, plant celebrated the production of its six millionth fan drive on November 15, 2011. The fan drive was manufactured for longtime Horton customer FleetPride, Inc. of The Woodlands, TX.

“We’re proud to reach the six million mark in Britton and delighted that FleetPride, a distributor we have worked with for more than 20 years, is part of this milestone,” says Jeff Lindgren, senior vice president of sales for Horton.

“We are honored that Horton is celebrating this significant achievement with us,” says Lindley. “FleetPride is pleased to offer Horton’s reliable, high-performance products to our customers throughout the United States.”

Including the six millionth fan drive produced in May 2011 at the Britton facility, Horton has manufactured a total of 17 million fan drives around the world. The company has produced more on/off fan drives than any other manufacturer.