Baldwin Filters recently held a groundbreaking ceremony to celebrate the start of a 400,000 square foot expansion of the company's headquarters in Nebraska. 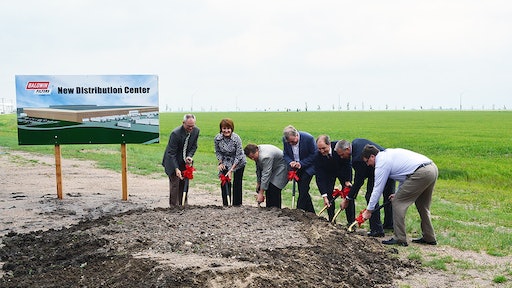 A groundbreaking ceremony at Baldwin Filters on Wednesday, May 29, 2013 commemorated the start of a 400,000 square foot expansion to its headquarters in Kearney, NE.

Representatives from Baldwin and its parent company, CLARCOR, as well as officials from the city of Kearney and Buffalo County attended the ceremony held on the construction site.

“We are pleased to initiate this key project,” says Sam Ferrise, Baldwin Filters President. “This expansion will allow us to better serve our customers around the world by adding significant warehousing and shipping capacity.”

The new distribution center will take approximately one and a half years to complete at an estimated cost of $40 million. The project will more than double the number of loading docks at the facility and will feature an upgraded warehouse management system to increase productivity and efficiency.

“The City of Kearney is excited and appreciative of Baldwin’s decision to expand in Kearney,” says Mike Morgan, Kearney City Manager. “This project is another excellent example of city, county and state officials coming together to promote economic development opportunities for the private sector.”

“Baldwin continues to grow its market share both domestically and globally. This expansion will enable Baldwin to support its growth objectives,” says Chris Conway, CLARCOR CEO.

“We appreciate the assistance and work done by the City of Kearney, Buffalo County and the Economic Development Council of Buffalo County in the planning stages of this project,” says Ferrise. “We are in the final stages of selecting a general contractor, and look forward to completion of this important expansion to our Kearney facility.”