Volvo Penta has signed a deal to supply D13 and D16 engines for sugar beet harvesters manufactured by Agrifac. 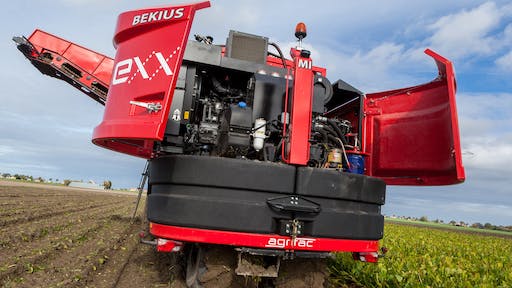 Volvo Penta has signed a deal with Dutch OEM Agrifac to provide D13 and D16 engines for four of its six-row sugar beet harvester models — marking an expansion of Volvo Penta’s business in the agriculture market.

“We are very happy with how well these engines are performing in our machines,” says Doeko Blaauw, R&D Director at Agrifac. “The fuel consumption has been even lower than we expected.”

The agricultural segment is of increasing importance in the company’s push to grow its industrial versatile engine business. Partnering with Agrifac marks an important step in Volvo Penta’s growth in that segment.

“With our easy installation, an aftertreatment system that doesn’t require a diesel particulate filter and a global availability of parts, our engines are well suited to certain products in the agricultural segment — like beet harvesters and sprayers,” says Rogier Morang, Key Account Manager of Industrial Engines in Benelux. “We see a lot of opportunities to grow in this sector, as well as with Agrifac.”

This year, for the first time, Volvo Penta will also exhibit at the agricultural exhibition Agritechnica in Hanover, Germany, where it will show off its range of Stage IV/Tier 4 Final engines. To learn more, visit Volvo Penta in Hall 01 Stand J112.