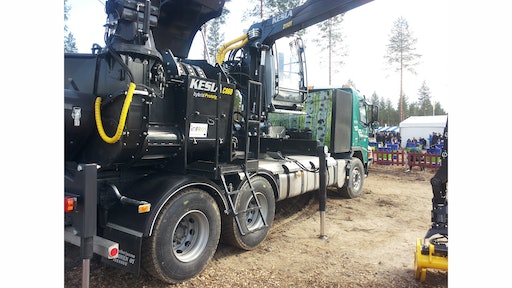 Currently hybrid engines are still rare in industries that require heavy machinery. As with hybrid automobiles, the wood chipper utilizes electricity as an alternative energy source.

“Volvo Penta has always played an active part in innovative advancements in new technology, both on land and at sea,” Jonas Nilsson, Volvo Penta’s Industrial Sales Manager for Nordic, Baltic and Benelux, explains. “Volvo Penta is proud to partner with Kesla Oyj on this project.”

Wood chip is a solid bio fuel and is often used to heat buildings or in energy plants to generate electric power from renewable energy. As wood chip is a source of green fuel, there are considerable benefits to harvesting the raw material using equally environmentally conscious methods.

“Wood chip has increased in popularity as a green fuel on an international level, which means that lowering the emissions and noise caused by the chipping process will further strengthen its position,” Kari Kokko, Product Development Director at Kesla Oyj, notes.

The Volvo Penta engine contributes to the Kesla C860’s improved handling, drive comfort, wood chip quality and overall safety. A hybrid system, such as the one used in the Kesla C860, offers an estimated 20 to 40% lower fuel consumption compared to a traditional wood chipper.

The first version of the hybrid wood chipper was presented at FinnMetko 2014; the next step will be the machine’s testing phase, before the Kesla C860 is released for general sale in 2015. “The hybrid wood chipper’s testing will begin right after the fair,” Kokko says. “The technology is new, so we want to ensure its suitability and develop it further before initiating sales.”