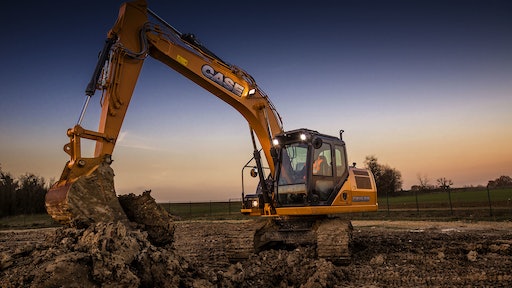 CASE Construction Equipment is extending its new generation D Series crawler excavator offering with the introduction of new models at the bauma 2016 exhibition. The CX130D, CX160D and CX180D fit in the medium range, while the other new models take the D Series’ big performance to a new level: the CX490D adds approximately 1.5 t to its predecessor in the C Series, bringing its weight very close to 50 t; at the top of the range, the CX500D in Mass Excavation version delivers massive performance with an operating weight above 50 t. The two heavy-duty models, which replace the previous generation’s CX470C and CX470C ME, have been renamed to reflect their increased weight. All the new models feature CASE’s exceptionally fuel-efficient Tier 4 Final (Euro IV) maintenance-free technology with no DPF. They offer the high productivity, comfort and safety levels, and low running costs that the previously launched D Series models have become known for.

The new D Series crawler excavators share the well-proven CASE Intelligent Hydraulic System of the previously launched new generation models. The improved D Series system with High Performance Hydraulics Control takes controllability and smooth operation to a new level. The faster cycle times achieved with the new, more efficient hydraulics, and the greater weight raise the bar on these models’ productivity – especially in the top two that weigh in at more than 25 t.

The new models deliver faster cycle times because of the new electronically controlled hydraulic pumps and larger main valve, which increase their productivity further. The new pumps and bigger valve improve the machine’s responsiveness, resulting in cycle times up to 12% faster than the previous generation’s. In addition, the new models deliver a greater lifting power.

The high productivity is further enhanced by the crawler excavators’ excellent autonomy resulting from the high capacity fuel and AdBlue tanks combined with the machines’ fuel efficiency. Also, the AdBlue tank only needs to be refilled every 10 fuel refills, so that no time is wasted.

Operating costs of the new D Series models are remarkably low. To begin with, the engine technology and new hydraulics result in lower fuel consumption than the previous generation.

The new models comply with Tier 4 Final (Euro IV) emissions standards with an aftertreatment Selective Catalytic Reduction (SCR) system and Diesel Oxidation Catalyst (DOC). With this solution, exhaust gases are treated exclusively through chemical reactions in the SCR and DOC; no particles are trapped in the system, so that no Diesel Particulate Filter (DPF) is required.

This is a very simple and effective solution to dramatically reduce polluting emissions and, as it is an aftertreatment system, the engine runs at optimum efficiency, delivering more power with less fuel. As a result, customers enjoy significantly lower fuel expenses. The system is also very economical in its use of AdBlue, which is just 3% of fuel consumption. In addition, as there is no DPF regeneration or DPF replacement, maintenance and operating costs are remarkably low.

Three working modes – Speed Priority, Heavy and Automatic – help the machine conserve energy and exert only as much power as needed to complete the job at hand.

The spacious cab offers best-in-class space and the ultimate interior configuration with premium features. The fully adjustable workstation with a new air-suspended high-back seat delivers excellent comfort. The pressurized and iso-mounted cab keeps noise and vibration down, providing an operating environment among the quietest in the D Series’ class. The large multifunctional widescreen monitor with continuous rear view camera adds to the already excellent all round visibility.

Each machine is available with a new (optional) LED working light package that provides illumination similar to sunlight – and more than three-times brighter than halogen – allowing contractors to work around the clock.

The ROPS cab is certified for ROPS level II as standard on all models and a full range of optional front guards is available to ensure the operator’s safety in tougher working environments. The optional factory fitted travel alarm contributes to greater safety on the jobsite around the machine.

The CASE SiteWatch telematics system enables the fleet manager to keep track of the machine and helps prevent misuse of the equipment, protecting the customer’s asset.

The new undercarriage design that has increased the dimension of components results in even greater reliability and durability. The new undercarriage one-side slope design ensures there is less material build up between the frame and the track chain. The material easily slides outward during cleaning operation and the operator will save time cleaning the undercarriage.

Case Exhibiting Range of Products for Construction Industry at bauma 2016