SDLG has introduced its E635F excavator and L968F wheel loader, both of which feature Tier 3 Yanmar engines, as part of its continued efforts to expand into various global markets. 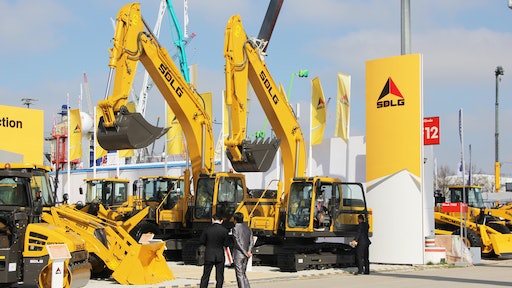 SDLG has returned to the world’s largest construction equipment fair, bauma 2016, with an expanded product line, stronger global sales network and much bigger customer base. On display at bauma is a range of SDLG’s best sellers, plus a number of new launches — all designed around the company’s core principles of reliable performance, robust design and better value for customers.

This year’s bauma 2016 exhibition in Munich, sees SDLG show expansions and diversifications in its product line, while underlining its development as an international company. Ongoing growth saw SDLG boost its global reach in 2015 and the brand is now represented by 77 dealers worldwide, supporting thousands of SDLG machines across the globe.

As part of its bauma 2016 offering, SDLG is showcasing its two notable new products, the E635F excavator and the L968F wheel loader.

The 3.6 t rated E635F sits at the lighter end of the scale and includes a high-torque Tier 3 Yanmar 4TNV88 engine that enables powerful and reliable performance yet still offers energy efficiency benefits. Configured with proven Rexroth load-sensing technology, the excavator works efficiently, delivering power where it is needed most, while also offering greater flexibility to users through a choice of multiple work modes.

The ergonomic cab has air conditioning and all-round glass for maximum visibility, while the GPS system facilitates easier tracking and machine management. The widened X-shaped chassis gives the machine better stability on rough ground. The end result is a compact and powerful machine that delivers SDLG’s trademark reliability and robust performance in a cost-effective package.

SDLG remains one of the world’s leading suppliers of wheel loaders by volume and it is looking to underline its commitment to this product sector with the introduction of its latest unit at bauma 2016. The SDLG L968F is a higher-spec wheel loader, designed for construction, mining and aggregates applications. A 6 t rated machine, it comes with a low-revs, high torque, Tier 3 compliant engine that is low on emissions and high on fuel economy.

With an SDLG-designed VRT200 rigid-axle transmission converter and synchronized four-speed transmission, the L968F offers improved stability on rough terrain and better traction in unstable conditions. The machine’s hydraulic core is centrally arranged for easier maintenance and service, while the enlarged cab improves visibility and operator comfort. CE-certification has been achieved for the new L968F and it will be available to customers in the eastern European market.

In addition to the host of regional launches and landmark machine deliveries it achieved in 2015, SDLG continues to develop its brand through a series of ongoing campaigns and industry initiatives. For example, last year saw the company roll out its Top Driver campaign in Thailand. The program is aimed at enhancing machine operators’ skills and improving safe practice on site and has been endorsed by the Thai government. Its Top Driver campaign in China is already an established event in the industry calendar, attracting thousands of participants each year.

SDLG also continued its ongoing partnership with the Asian Football Confederation (AFC). In 2015, as one of the main sponsors of the AFC Champions League soccer tournament, SDLG hosted a customer event at numerous matches. At many games, SDLG showed machines outside the stadium, displayed under the theme ‘China Lifts Football Dreams.’ The partnership with AFC is part of SDLG’s continuing efforts to develop its presence in Asian and Middle Eastern markets.

“2015 was a strong year for SDLG, and I’m confident that 2016 will be too,” says Shaohua Guo, Brand and Communication Director of SDLG, including sponsorship of AFC and Thailand Top Driver. “The brand is growing throughout the APAC, EMEA and Americas regions and bauma 2016 help[s] us showcase our development to a large and diverse group of stakeholders.”