At bauma, Hatz displayed its engine range of which several are already compliant with the impending Stage V emissions regulations. 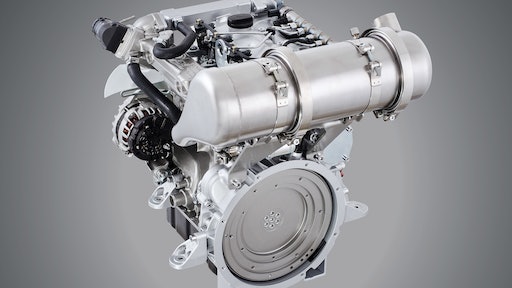 Based on the recommendation of the EU Commission dated September 25, 2014, EU Stage V can be expected from January 2019 in Europe with the introduction of the exhaust gas standard for mobile machinery. It is expected that within 2016 the regulation will be presented in the definitive final version. For this, Motorenfabrik Hatz showed solutions for its whole engine range in hall A4 on stand 548 at bauma 2016, the world’s leading trade fair for the construction business.

No real challenge for Hatz

Hatz engines up to 19 kW are already certified today to Tier 4 and thereby also fulfill the Stage V requirements without any modification. In EPA-regulated markets, the Tier 4 specifications have applied to these engines since 2010. Since then, all Hatz engines in this performance class have been delivered around the world subject to these EPA specifications. In the power range 19-56 kW, the new H-Series fulfills the specifications of Tier 4 Final. Thanks to the best preconditions for a proven exhaust aftertreatment, the step to a Stage V compliant engine is not far. Equipped with a diesel particulate filter (DPF), it also ensures the requirements of EU Stage V in the future.

Stage V from the market leader

In the range of single-cylinder and 2-cylinder engines up to 19 kW, Hatz has been one of the market leaders for decades. The introduction of the EU Stage V emissions level will not cause any changes to these Hatz engines. There are also no limitations on the usable speed range. No exhaust gas treatment is required with Stage V. Hatz customers can – without having to fear modifications – continue to use the established and tested B-, D- and G-Series engines as well as the 2M41 and 2L41 in the usual scope of performance..

Fit for the future

In the development of the H-Series, Hatz had already placed the emphasis on future stricter exhaust gas regulations. The specifications included low fuel and oil consumption, friction losses as low as possible and downsizing for optimum load profile. In addition, the combustion is perfected with iHACS (intelligent Hatz Advanced Combustion Strategy). All of this results in lower particulate emission and reduced generation of ash, hence making the exhaust gas treatment more efficient. To meet the specifications, the H50TIC models are equipped with a splittable, and maintenance-friendly diesel oxidation catalyst and DPF combined filter, and thus becoming the H50TICD.

With optiHEAT (optimised Hatz Exhaust After treatment Technology) and intensive research and development work, the Hatz engineers have been successful in the design of the matching DPF. Here, reasonable dimensioning of the DPF substrate (high storage capacity versus long heating time) plays a role – as does a reasonable temperature range or the technical execution as an active or passive system. The regeneration strategy is also crucial for the conception of the DPF system. It must be brought into compliance with the operation time per machine use and service life of the machine.

In addition, not only does “optimized” mean the ideal model size design of the DPF system for the requirements of the machine in this context, but also optimum adaptation to the load/temperature profile under real conditions, as well as a regeneration strategy matched to requirements. The expandable modular system also allows flexible installation and simple maintenance.

High demands on the technology

Industrial diesel engines with a power output of less than 19 kW will then also be affected for the first time by EU Stage V. It now specifies the particulate mass limit at maximum 0.6 g/kWh, the emission limits for nitrogen oxides and hydrocarbons at 7.5 g/kWh and is thus comparable with EPA Tier 4 Final.

For diesel engines between 19 and 560 kW, a limit for the particulate numbers of 1012 per kilowatt hour has been introduced. According to the current state of the art, this makes the use of a DPF unavoidable.

Lowering emission values are good for the environment, but a growing technical challenge for all engine and machinery manufacturers at the same time. The advances in the emissions relevant areas of engine development (injection, combustion, turbocharging and exhaust after treatment) have made it possible for today’s Hatz diesel engines to be among the cleanest on the market and are moving towards zero emissions.