In response to the need for higher levels of engine braking performance at lower engine speeds, Jacobs Vehicle Systems has introduced its High Power Density Engine Brake for the European market. 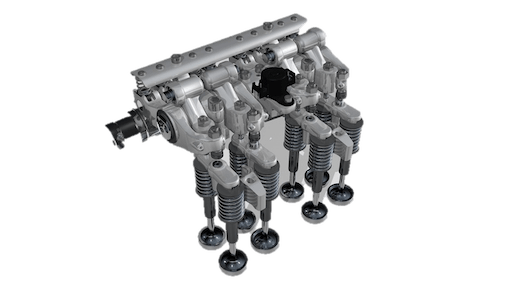 The production-ready Jacobs HPD Engine Brake realizes one-and-a-half times the braking performance of traditional compression release braking over the engine’s entire operating range and more than two times the braking performance at lower rpm (the same retardation at 1,400 rpm as at 2,100 rpm previously). It delivers 2,000 Nm of retarding torque at 1,300 rpm and beyond and 611 kW power at 2,500 rpm in a 13-L engine. This provides large engine displacement retarding power in small and medium displacement diesel and natural gas engines. While delivering revolutionary braking performance, the HPD system is quiet in operation, being fully integrated into the customer engine’s overhead design. It can assist with exhaust aftertreatment thermal management by preventing the catalyst from cooling during descents.

Jacobs’ HPD Engine Brake was developed in response to the drive by global engine suppliers to provide higher levels of engine braking performance at lower engine speeds and improve thermal management to match industry trends such as downspeeding and downsizing of engines, which are driven by the need for better fuel economy and lower total cost of ownership. Engine brake retarding performance is becoming increasingly important because key strategies for improving fuel efficiency are reducing the natural retarding of the vehicle caused by wind resistance, engine, drive train, and rolling resistance from the tires.

Jacobs’ HPD Engine Brake transforms the four stroke engine into a two stroke compression device by deactivating the main intake and exhaust valve events and supplementing with two stroke valve events. Whereas a conventional engine brake has one compression release and one brake gas recirculation event per cam rotation, this innovative and patented two-stroke technology achieves two braking events per cam rotation. It is fully variable with controlled boost modulation, which allows the driver to achieve the right balance between retardation, speed and efficiency.

Another effect of market demand for improved fuel economy is the conversion of some fleet vehicles to natural gas engines, whose smaller turbochargers and lower compression ratios can diminish brake retarding power by up to 25%. HPD compensates for this loss so that fleets can still haul standard load sizes safely.

During a week-long test drive event at Millbrook Proving Grounds in Bedfordshire, UK, Sergio Sgarbi, Jacobs Vehicle Systems President, said, “There is significant market potential for Jacobs’ HPD Engine Brake in Europe, where Jacobs’ compression release engine braking has already been adopted by Daimler, Renault, DAF, Deutz and Volvo. But whereas approximately 90% of all heavy-duty trucks in the UK employ engine braking (a similar proportion to North America), take-up in Germany and other European markets is less than that.

“The majority of European trucks still use hydraulic driveline retarders, which are dependent on vehicle speed for effectiveness, and are typically 175 kg heavier, with a corresponding penalty for the vehicle’s payload capacity. The Jacobs HPD Engine Brake can cope with those lower speeds, eliminating the need for a driveline retarder and becoming the primary choice in secondary braking,” continued Sgarbi.