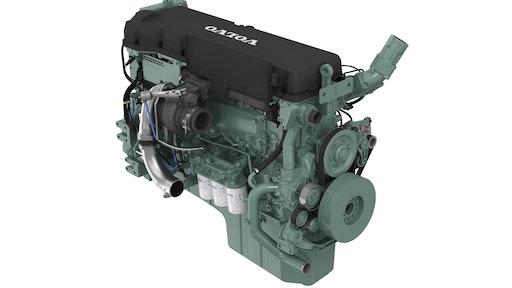 Volvo Penta has collaborated with global equipment manufacturer, Sandvik Mining & Construction, to develop an engine which is suitable for heavy-duty mining applications. The TAD1643VE-B, which was launched last month at bauma, has now been unveiled as the new engine for the latest underground mining truck by Sandvik. The companies worked together after Sandvik turned to Volvo Penta for help in replacing existing 19-L engines in its TH663 trucks.

“We’ve worked with Volvo Penta on other projects and have a close relationship with them,” says Mark Ryan, Product Line Manager for Trucks, Loading and Hauling at Sandvik’s mining division.

“Their performance, both in terms of technology and customer service is exemplary, so it was a no-brainer to ask them to help us with this machine.

“We needed a high horsepower engine of the right size and class, which is robust and more cost effective to install and run than the previous engines.” He adds, “They are very open to supporting us and we appreciate that. Volvo Penta is very dynamic in pursuing new opportunities and different markets, such as mining.”

Tough engine for a tough application

The TAD1643VE-B offers a range of features, making it a compact, versatile and cost-effective off-road industrial powerhouse, which is the best in its emissions class. Features include:

Sandvik’s new TH663 underground truck, incorporating the 16-L Volvo Penta engine, has been tested extensively, and is now in operation in hard-rock metal ore mines in Australia. They will also be available in other international regions.

“These are very harsh environments underground,” says Ryan. “The engines on our trucks need to withstand really heavy-duty cycles and continuously haul heavy loads up a steep ramp.

“This is a tough application, but we’ve noticed that with the better torque delivery of the Volvo Penta engine, our trucks can haul up the ramp faster now, compared to the previous 19-L engines we used.

“It produces fewer emissions, also, which not only makes ventilation better for workers in the mines, but has an improved environmental footprint – so it’s a better option all-round.”

Sandvik operates in both sales and rental markets, and total cost of ownership was a factor in deciding to install Volvo Penta engines in the trucks.

“Capital and operating costs are both lower than with the previous engines,” says Ryan.

“Fuel efficiency is better and as the Volvo engine is a newer and more superior design than the engines we used to have, downtime will be reduced and we anticipate that it will last longer overall.”

He adds, “We want value for money as do our customers, and we’re pleased that this has been a collaboration with Volvo Penta rather than the usual customer-supplier relationship.”

Naval Singh, Volvo Penta’s Global Segment Specialist in Mining and Construction, says, “This is a perfect example of the close co-operation between us and Sandvik. After talking to them, we did some homework and found that there is huge possibility with our technology to replace bigger volume engines for the versatile application market today.

“We are pleased to be able to create a powerful, compact and reliable engine for the mining industry.”

Volvo Penta will be talking about the collaboration with Sandvik at the International Conference and Exhibition on Mining (MassMin) in Sydney at Booths 41-43.

As emissions regulations and OEM requirements have evolved, so to have heavy-duty engine oils to protect aftreatment systems and increase efficiency.
Sara Jensen
May 12, 2021
Follow Us