The new Cursor 9 CNG engine from FPT provides up to 400 hp at 2,000 rpm and meets Euro 6 emissions standards. 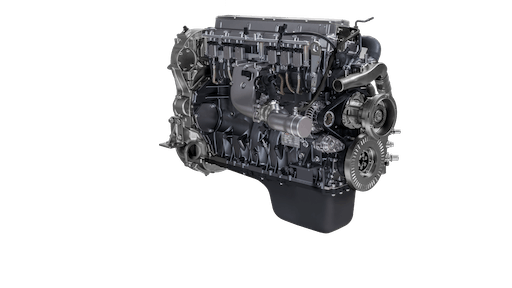 FPT Industrial, market leader and innovator of Compressed Natural Gas (CNG) engines, extends its range of on-road alternative fuel solutions with the first real 9 L diesel equivalent at the Beijing Bus and Truck Show, from May 23-26, 2016. The new Cursor 9 CNG, based on the Best in Class Cursor 9 diesel architecture, provides market-leading power and torque.

Unveiled under the slogan “Naturally Powerful”, the Cursor 9 CNG offers power up to 400 hp at 2,000 rpm, and torque up to 1,700 Nm at 1,200 rpm, while at the same time having emissions lower than Euro 6. Equaling the performance of FPT Industrial’s Best in Class Cursor 9 diesel version, the Cursor 9 CNG is the only alternatively fueled 8.7 L that can compete with its diesel counterpart without compromise.

The 6-cylinder engine, the ideal solution for applications such as heavy haulage, garbage collection, city and intercity transportation, is powered by natural gas, in its compressed (CNG), liquefied (LNG) or renewable form (bio-methane). Compared to diesel, the CO2 emissions of natural gas powered vehicles are significantly less and can be close to zero by using bio-methane.

The Cursor 9 CNG uses stoichiometric combustion to generate its power. Since 1995, when FPT Industrial started pioneering CNG solutions for industrial applications, it has been the companies chosen technology, proven to be the only viable and cost-efficient solution available today to meet Euro 6 emission limits.

To comply with Euro 6, the Cursor 9 CNG does not need Exhaust Gas Recirculation (EGR) or Selective Catalytic Reduction (SCR), but relies on a simple three-way catalyst. A compact catalytic converter, located at the end of the exhaust, features an integrated structure plated with three precious metals. Where the Platinum and Palladium convert CO and HC into CO2 and H2O, the Rodium converts NOx into N2.

The Cursor 9 CNG, which replaces the 7.8 L Cursor 8 CNG, boosts increased displacement, new multipoint fuel injectors and a new fuel rail to allow for a higher flow rate. This, together with the modified cylinder head, characterized by intake ports with an optimized swirl angle, grants class-leading fuel consumption.

Compared to the Cursor 9 diesel, the new engine has a Ni-Resist cast-iron exhaust manifold and water cooled wastegate turbocharger, increasing reliability. This is further supported by new piston rings to increase the oil service intervals by 17% versus the Cursor 8 CNG, arriving at best in class for scheduled maintenance.

To increase driver comfort and thus performance of the final product, the Cursor 9 CNG will be the first alternatively fueled heavy-duty engine that can be coupled to an automated robotized transmission. Furthermore, the truck equipped with the new engine makes less noise than the
average vacuum cleaner allowing for inner-city delivery at less than 72 dB(A).

“This engine opens up a whole new market for alternative fuels, replacing the existing product, mainly engineered for applications such as city bus and waste collection,” says Annalisa Stupenengo, Brand President of FPT Industrial. “Being at the forefront of innovation is part of our
mission. That is why we at FPT Industrial have raised the bar and developed this new class-leading Cursor 9 CNG engine, a real alternative for long haul truck and intercity bus missions.”