Among the products MAN is exhibiting is its new TGE transporter range with a payload of up to 1.5 tonnes, and its fully electric Lion City articulated bus concept vehicle. 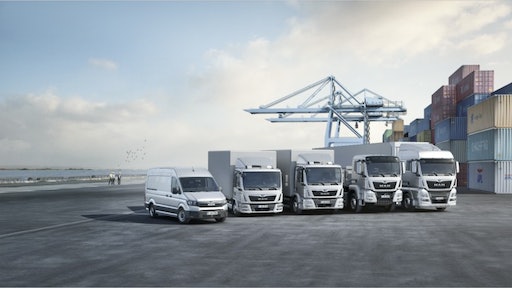 With the world première of the new MAN TGE, MAN is extending its product portfolio to include vehicles with a permissible gross weight starting at 3.0 tonnes, making it a full service provider for all transport requirements. MAN’s strong brand presence is rounded off by engines with new power levels, finely tuned transmissions, new interior and exterior design features focussing on the MAN lion trademark, as well as the introduction of the latest member of their coach family, the NEOPLAN Tourliner. At the same time, the traditional Munich-based manufacturer is preparing for the logistics of the future with new digital products and services.

A particular highlight of this year's IAA is the world première of MAN's new transporter product range, TGE. This commercial vehicle for distribution transport and the building trade can handle permissible gross weights from 3.0-5.5 tonnes, thus making MAN a full service provider. The new MAN TGE will be available in numerous customizable variants, boasting the best Total Cost of Ownership (TCO) and an impressive payload of up to 1.5 tonnes. The completely new diesel engine generation installed in the vehicles is characterized by its durability, reliability and economy, promising new peak performances for the new MAN TGE when it comes to efficiency and the environment. At the same time, state-of-the-art assistance systems offer maximum safety and the usual professional MAN service is of course always at hand.

More power and a new design

In terms of design, MAN will be presenting a wide range of new features at the IAA. With regard to exterior design, greater emphasis will be placed on the MAN lion as an emotional marker. Appearing in a bold new design against a shiny black background, the lion on the chrome clasp above the grille is now even more prominent. The interior also devotes more attention to the lion, while the newly developed bright colors and fabrics for all textile surfaces create a completely new sense of space. The changes to the exterior and interior will be implemented on all new vehicles in the TGL, TGM, TGS and TGX Series. With the new PerformanceLine edition of the TGX with an output of up to 640 hp, MAN combines top performance with equally high design standards in their strongest model.

MAN Truck & Bus will also be presenting a range of measures designed to optimize the D26 and D38 engines at the IAA. The new engines offer more torque and greater performance with lower consumption. The new D26 and D38 engines also feature a new, more reactive catalyst material for the SCR system, which means that combustion and exhaust gas treatment can be optimized so that consumption is reduced even further.

The top engine model with 640 hp, which was previously reserved solely for heavy-duty versions, is now available for almost all variants of the MAN TGX D38. All other power levels have been increased by 20 hp respectively, meaning that MAN now offers 540 hp and 580 hp with the new D38. The tried-and-tested D26 engine also benefits from an additional 20 hp and 200 Nm in its new version, reaching a peak performance of 500 hp. In addition to the numerous emission-reducing measures, this engine now features the electronically-regulated engine brake EVBec as standard.

The two tried-and-tested MAN engine series D08 and D20 also come with a range of new features, which contribute to further reductions in fuel consumption while helping to maintain the engines' proven reliability.

The NEOPLAN Tourliner is making its world debut in the bus sector as a new entry model in the field of premium coaches. The flexible usage possibilities, the large number of assistance systems and the excellent efficiency make the new NEOPLAN Tourliner a real all-rounder in its field. All new bus models also benefit from improved engine and transmission functions that offer increased torque and output as part of the optimized drivetrain, all whilst retaining the same low levels of consumption.

With its comprehensive bus portfolio, MAN has the perfect solution for every requirement in the field of intercity buses, city buses and coaches. City buses with a variety of available drive concepts already provide solutions for a modern public transport system, with the MAN Lion’s City CNG, for example, allowing for CO2-free operation thanks to the use of biogas. The MAN Lion’s City Hybrid reduces fuel consumption by recovering the kinetic energy used for braking and coasting.

All coach and intercity chassis also feature the latest assistance systems, which contribute to safety, comfort and efficiency. Another innovation in this area that will be presented at the IAA is the latest generation of pre-emptive cruise control systems, MAN EfficientCruise, which now for the first time features the EfficientRoll freewheel function that permits further optimizations to the fuel efficiency of MAN and NEOPLAN coaches. The MAN and NEOPLAN coaches also meet accessibility requirements stipulated for long-distance transport services in each segment.

With its new digital products and services, MAN is paving the way for the logistics of the future. At the IAA 2016, MAN is devoting a special platform to RIO – the new brand in the field of digital solutions from Volkswagen Truck & Bus. RIO is an open, cross-manufacturer business and technology platform that provides individual and uniquely intuitive digital services for the entire transportation and logistics ecosystem. Digital recording and processing and wide-reaching, cross-company utilization of data forms the basis for the intelligent control of logistical processes. The transport chain is made up of both data providers and data users. As the initiator of RIO, MAN is responsible for its development within the Volkswagen Truck & Bus Group.

With regard to eMobility, MAN will be introducing a number of innovations at the IAA 2016. As well as presenting the fully electric MAN Lion’s City articulated bus as a concept vehicle and introducing different charging infrastructure concepts, MAN Truck & Bus will also be showcasing a TGS semi-trailer tractor with electric drive for use in applications relating to inner-city night-time supply. Optimized for use with a city semi-trailer, the concept vehicle offers a high load volume with a low tare weight, and is free from emissions (CO2, NOx, noise).

Thanks to its many years of experience with electrified drivetrains and the electrification of further components in the MAN Lion's City Hybrid, MAN Truck & Bus is in an excellent position to provide transport companies with a practical and efficient solution in the electric bus segment. MAN relies on a modular approach, through which charging technology can be selected and combined as needed, with the number of storage modules depending on the required range and transport capacity. In 2018, MAN will be sending a pre-series bus version of a battery-electric vehicle (BEV) for field testing as part of its eMobility roadmap. Series production of a 100% electrically-driven city bus will commence before 2020.

The technological expertise from the eMobility modular system in the bus sector will in future also be available for electric truck applications. In addition, MAN’s membership in the Volkswagen Group means that it can utilize synergies within the group and draw value from the dynamics of the passenger car sector.

MAN Latin America at the IAA

MAN Latin America will also be attending the trade fair, showcasing its truck range with two Constellation type trucks. The first is as a VW Constellation CNG truck with emission levels that meet the Euro 6 standard, the second a VW Constellation anniversary model, which celebrates its 10th anniversary with an improved transmission and high-quality interior details. The focus here is on environmental aspects, with the environmentally-friendly driver's cab partly fitted out with recycled materials. The third trade fair exhibit presented by MAN Latin America at the IAA 2016 is a Volksbus powered by sugar cane diesel.