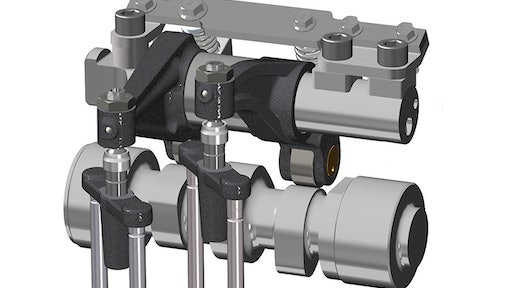 CDA uses the proven componentry of Jacobs’ High Power Density (HPD) engine brake, but in a new application and for a new purpose. Whereas HPD’s advantage is that it equals or exceeds the braking capabilities of a driveline retarder at a fraction of the cost, CDA’s benefits are reduced tailpipe emissions plus better fuel economy. CDA and HPD technologies are modular and can be integrated into an engine individually or together.

For CDA, cylinder deactivation mechanisms originally designed for HPD applications are used in the valvetrain to disable the opening of the intake and exhaust valves. The hydraulically-activated mechanism is integrated in a collapsing valve bridge system for overhead camshaft engines or with a collapsing pushrod system for cam-in-block engines. When this is combined with disabled injection in selected cylinders, the deactivated cylinders act as a gas spring and return the compressed energy of the air back to the crank.

CDA reduces emissions by achieving higher exhaust temperatures in the operating cylinders. This makes it possible to maintain aftertreatment temperatures when the engine is in low load operation. It also enables faster warm-up of the aftertreatment system after engine start-up and minimizes cooling during coasting. Temperature increases of 100-200 C are achieved in low load conditions and 250 C is consistently maintained at loads of approximately 15 kW or more.

CDA simultaneously enables large engines to have the fuel economy of smaller engines because it increases exhaust temperatures for optimal SCR (Selective Catalytic Reduction) operation; reduces camshaft friction; reduces pumping losses in part-load conditions; and can reduce or eliminate use of the intake throttle. One, two or three cylinders can be deactivated as needed. At the lowest engine loads and with three of six cylinders deactivated, fuel consumption improves by up to 20%. During vehicle coasting conditions, CDA can be applied to some or all cylinders to further reduced the air mass flow going through the aftertreatment system to both reduce the cooling, and also reduce engine pumping losses, allowing the vehicle to coast further with less fuel.

Jacobs’ Cylinder Deactivation mechanism has proven its effectiveness and reliability in evaluation programs on seven different engine platforms with manufacturers in North America, Europe, China, Japan and Korea. During these trials, CDA hardware has been subjected to over 4,300 hours of durability testing, more than 1.2 billion component cycles, and 500 million cycles of fatigue and overload testing. These tests have shown that CDA is production-ready.

Steve Ernest, Vice-President of Engineering & Business Development at Jacobs Vehicle Systems, comments, “CDA will be of interest to OEMs who want to reduce emissions through improved after-treatment performance, without having a negative effect on fuel economy. We expect high levels of interest in this technology because its dual benefits will become increasingly important in the near-future, when vehicle manufacturers will have to meet stricter emissions regulations while still improving fuel economy.”

The California Air Resources Board (CARB) is scheduled to tighten NOx emissions rules for low-load drive cycles in 2024 and regulators in Europe and China are widely expected to follow suit. To meet these tougher requirements, CDA is a proven solution that can be applied to your engine.