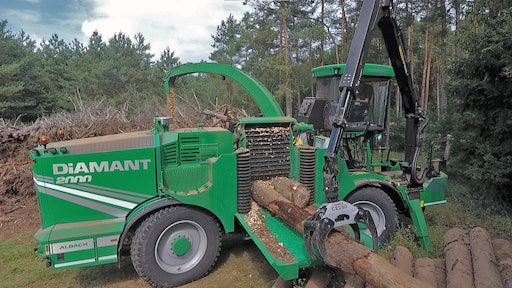 MAN Engines is now the engine supplier for Albach Maschinenbau, which will be fitting the MAN D4276 six-cylinder inline engine in its Diamant 2000 self-propelled wood chipper. For the update to the Diamant 2000, which has been in production since 2014, Albach is moving to a new engine supplier in MAN Engines, and has chosen to power the vehicle and the integrated chipper with the state of the art 790 hp (581 kW) MAN D4276 LE122.

For Dr. Matthias Schreiber, the Head of MAN Engines, the D4276’s combination of reliability, engine performance, optimum power-to-weight ratio and low fuel consumption was crucial in the machine manufacturer’s choice: “Albach promises its customers premium quality and the most powerful all-road self-propelled machine. We can offer our customer the perfect engine to achieve that.”

MAN Engines unveiled the MAN D4276 to the public at Agritechnica 2019. The completely redeveloped diesel engine with 142 mm bore and 170 mm stroke has a displacement of 16.2 L and produces an impressive 581 kW of power. The power pack weighs in at just 1,280 kg and sets new standards: Not only is it the most powerful inline six-cylinder engine for agricultural machines that MAN Engines has ever developed, it also has the highest power density in its displacement class. MAN Engines has achieved the high peak power thanks to its newly developed charging concept with fixed geometry charger, which enables a maximum torque of 3,400 Nm between 1,350 rpm and 1,600 rpm.

“With the D4276, we are offering OEM manufacturers an engine that is easy to integrate and will help set them and their machines apart from the competition, thanks to its unique performance characteristics,” comments Reiner Rössner, Head of Sales at MAN Engines. To comply with current emission levels, the D4276 relies on the compact, flexible and modular exhaust gas aftertreatment (EGA) system from MAN Engines, and is available for the main markets in models meeting the EU Stage V and EPA/CARB Tier 4 emission standards.

As well as Albach, premium manufacturers have also adopted the MAN D4276; AGCO Fendt for its Fendt Ideal 10 (harvester), and CLAAS for the CLAAS Lexion 8900 (harvester) and CLAAS Jaguar 970 (forage harvester) machines. In addition, the Austrian manufacturer Kahlbacher is also installing the engine to power snow cutter blowers for use at airports.