A collaborative study of the dDSF technology on a Cummins X15 HD Efficiency Series engine shows reductions in nitrogen oxides and carbon dioxide, as well as increased fuel savings. 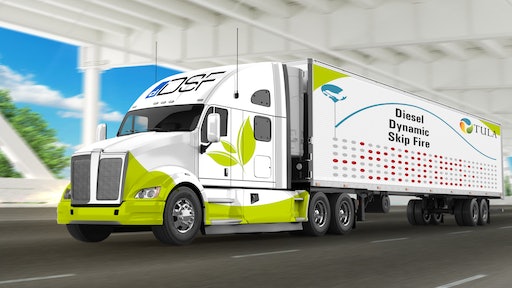 Per Cummins' press release announcing results of the study, low-load cycle performance was estimated with a well-calibrated powertrain simulation tool to accurately capture the low-load system operation and emissions. The company says it showed a 74% reduction in NOx and a 5% reduction in CO2 compared with today’s clean diesel technologies. In addition, the dDSF showed a 20% savings in fuel.

According to Cummins' press release, Dynamic Skip Fire is an advanced cylinder deactivation control strategy that makes decisions for an engine’s cylinders on an individual basis to best meet torque demands while saving fuel and maintaining performance. It also notes that Tula’s original Dynamic Skip Fire (DSF) software has been shown to significantly reduce CO2 emissions in gasoline engines and has been in production since 2018 with more than one million vehicles on the road.

Cummins and Tula have been working together since 2019 to demonstrate the potential benefits of the technology in diesel engines. In April 2020, the companies announced initial results from use of the technology on a Cummins X15 Efficiency Series 6-cylinder diesel engine. Engineering teams from the two companies modified the engine system and integrated Tula's DSF control algorithms; the project demonstrated the ability to greatly reduce emissions and fuel consumption.

READ MORE: Engine Technology to Meet Emissions Regulations and Beyond

“Our mission at Cummins is to make people’s lives better by powering a more prosperous world, and we accomplish this through innovation,” said Lisa Farrell, Director, Accelerated Technology Center for Cummins Inc., in the company's press release. “Tula’s dDSF technology provides significant benefits to reducing NOx and CO2 emissions under low-load vehicle operation, which will aid our efforts to produce more reliable, more powerful engines while meeting our environmental goals.”

“NOx standards are becoming progressively more stringent for diesel engines, and meeting those standards is increasingly challenging, even for a class-leading, efficient engine like the Cummins X15 HD,” said R. Scott Bailey, President and CEO of Tula Technology, in the press release. “Our dDSF is a powerful and unique technology that enables original equipment manufacturers to significantly reduce NOx emissions that contribute to smog while simultaneously reducing fuel consumption and greenhouse gas production. We appreciate the opportunity to work with Cummins to demonstrate the capability of our technology.”