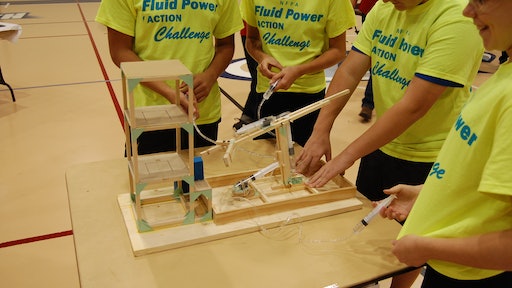 Through the program students learn about fluid power principles, and then use what they’ve learned to design a simple machine. The Action Challenge consists of first a Workshop Day, then a Challenge Day several weeks later.

During the Workshop Day, students learn about fluid power and its use in everyday life, as well as careers within the industry. They then put this new knowledge to use by building basic pneumatic kits and working on simplified machines which rotate or lift objects. At the end of the Workshop Day, students are given the Action Challenge problem they will be tasked with doing on the Challenge Day.

Each year there is a new problem scenario, such as creating a machine which clamps, lifts and extends, or one that clamps lifts and rotates. Changing the problem scenario ensures students don’t copy designs from previous years. Upon receiving the problem, teams are given a kit of supplies and all of the tools they will need to create their designs.

Students then spend the next few weeks developing and building a design. On the actual Challenge Day, the teams are gathered together and given an identical kit to the one they initially received at the end of the Workshop Day to recreate their design on site during a set amount of time. While students are building their machines, Action Challenge judges walk around to speak with the teams about how they worked together and came up with their designs.

Once the machines are built, they are put into action moving objects, again within a set amount of time. Judges keep score by seeing how well each team’s machine works and how many objects are moved in the time allotted. Teams are judged based on their portfolio, design and teamwork in addition to how the machine works.

Over 20 challenges were scheduled to take place during 2016, and typically consist of around 25 teams per challenge.

Anyone interested in hosting a Fluid Power Action Challenge event—schools, members of the industry—can contact the NFPA to do so. In addition to helping provide guidance on how to host an event, the NFPA offers grants of up to $250 to schools or classrooms interested in participating in the Action Challenge to help offset costs.

Members of the fluid power industry can take part in the Action Challenge in various ways, such as being a judge for a local competition or hosting an event. Deltrol Fluid Products has hosted events for the past 8 years now. Bob Hammond, Manifold/Systems Engineering Manager at Deltrol, noted during a presentation at the Center for Compact and Efficient Fluid Power’s (CCEFP) Fluid Power Innovation Research Conference (FPIRC) the company’s goal in doing so is to encourage students to “just become an engineer” whether or not they plan to pursue a career in fluid power. He said getting women interested in engineering is a prime focus, as well.

Hosting a challenge involves a variety of tasks such as making contact with teachers; scheduling the workshop, challenge dates and venue; running the challenge and getting volunteers. Additionally, as host the company—and any industry partner who donates to the event—purchases the kits students will need to create their designs. Deltrol asks for a $10/student registration to help offset costs. Hammond says the company sees its involvement with the challenge as a means of community outreach, as well as a way in which it sets itself apart from others in the market.

In 2016, the company hosted two challenges, and featured one of the winning designs at its booth at IFPE 2017. Hammond says Deltrol asked the best machine performers of each challenge to relinquish their machines to the company whose engineering team chose one design to reverse engineer into a pneumatic machine with a controller that emulates the original student design.

The 2016 problem scenario consisted of building devices which could lift and move objects from a “Pick-Up Area” to designated “Drop-Off Shelves.” Machines had to pick up and place as many objects as possible within the 2-minute challenge timeframe. Design footprints were limited to being able to fit inside the area of an 18 x 8 in. (45.7 x 20.32 cm) rectangle which is surrounded by a 1-1/2 in. (3.81 cm) high wall.

Eisenhower 1, designed by a team of students from Dwight D. Eisenhower Junior High School in Hoffman Estates, IL, was the winning machine which Deltrol reverse engineered and exhibited at its IFPE booth (S81420). “Their machine had the minimum number of axes of motion to complete the task and their design was simplistic, effective and efficient,” says Hammond. In addition, the machine was able to place an object in the highest available point position on the Drop-Off Shelves. This, and many other aspects of the student design, were closely mimicked by Deltrol’s version, he notes.

Deltrol’s goal in choosing a machine to reverse engineer and display at IFPE was to highlight the engineering capabilities of middle school students and bring the Action Challenge to the attention of other members of the industry. “Our goal is to simply grow the amount of challenges held across the country annually,” says Hammond. “This type of event promotes young minds to start exploring career options related to engineering early, whether directly in our field or another. We’re making critical thinking, problem solving engineers and we like it!”

The Deltrol product design team worked together with the company’s development team to measure Eisenhower 1’s machine parameters and lay out the skeletal framework for its machine design. Hammond says pneumatic cylinders were reviewed for feasibility and purchase; following cylinder selection, the company 3D printed the cylinder mounts and articulation axles in house to then add to the design. “We added an air source and a PLC for controlling all the cylinder movements and needed timings. We were then be able to set it up in Las Vegas, turn it on, and let it do its thing.”

Visit nfpahub.com/fpc to find out more about how to get involved in the Fluid Power Action Challenge, or see a list of upcoming challenges.

Programs for All Ages

For the 2016-2017 school year, the NFPA has introduced the Fluid Power Robotics Challenge, a scholarship which supports the FIRST Robotics program. The NFPA is offering one merit-based scholarship of $10,000 per year for four years to high school seniors who have participated as part of a 2017 FIRST Robotics Competition Team. The scholarship can be used for an engineering course at any accredited U.S. technical school/college or university.

Read more about the FIRST Robotics program in the article “Putting science and technology education FIRST.”

For college-level students, the NFPA has created the Fluid Power Vehicle Challenge which is based off a program developed by Parker Hannifin Corp. Participating engineering students are challenged to redesign a traditional bicycle by using hydraulics as the method for power transmission. Each team is required to include in their designs an accumulator for storing energy, an electronic control system and regeneration technology. 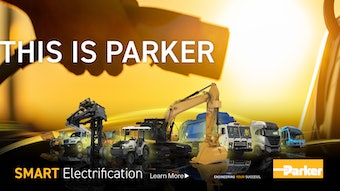 ZF Bus Connect enables users to check every aspect of a vehicle, including live view of vehicle locations in real-time and observing energy or fuel consumption.
ZF Friedrichshafen AG
December 10, 2021
Follow Us