The Adaptive Load Sensing system is able to modulate stand-by pressure according to the real working needs of a machine, automatically varying it only when and how required. 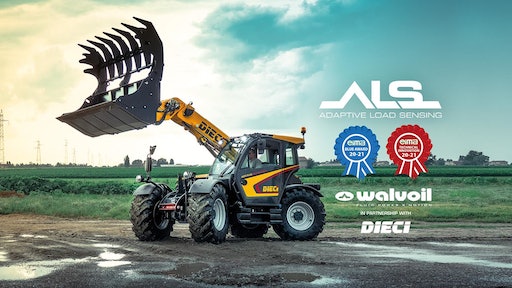 Walvoil Spa recently partnered with Dieci Srl to develop the Adaptive Load Sensing (ALS) system which minimizes the dispersion of energy in the hydraulic system of telehandlers, considerably improving the efficiency of the vehicle and consequently obtaining a reduction in wear and consumption.

The companies have won EIMA technical awards for the system— the "Technical Innovation 2020-21" Award, dedicated to machines and devices with innovative features, and the "Blu Award 2020-21” honoring solutions that stand out for environmental aspects.

How the ALS system works

Hydraulic systems are an essential part of the most modern and widespread agricultural machinery, especially telehandlers, which have now become irreplaceable for most companies.

In order to ensure the simultaneous control of movements in these systems, the hydraulic pump generates a pressure higher than what is really necessary, a predetermined value called "stand-by pressure differential" which  has been considered acceptable until now, but which implies a considerable loss of energy, limiting the overall performance of the vehicle and unnecessarily increasing wear and consumption, to the detriment of efficiency and environmental impact.

To give a solution to this problem, Walvoil has created Adaptive Load Sensing, a patent-pending system able to modulate the stand-by pressure value according to the real working needs of the machine, automatically varying it only when and how required.

In partnership with Dieci, the ALS system has been successfully tested on an AGRIPLUS telehandler, one of the top machines in the Dieci range for Agriculture.

ALS is made of a directional control valve, an electronic joystick, and an electronic control unit, with customizable modular software developed by Walvoil. The control unit collects information from the operations on the controls and from the machine sensors, and acts on the load sensing device, adapting the hydraulic pressure differential to the maximum efficiency value required by the vehicle.

During the tests, the Walvoil-Dieci Technical Team found on the AGRIPLUS a drop in energy dispersion values equal to 28% during boom operations, and up to 45% during traveling phases, with a significant improvement in the overall machine performance at various speeds.

The tests highlighted also further important advantages, first of all in terms of safety: by acting directly on the hydraulic signal, the ALS avoids the functional complexity associated with the digital signal. Furthermore, in case of failures, the original operation is automatically restored, avoiding machine downtime. Then in terms of stability: the control of the pressure value allows to improve the machine stability, with a consequent more comfortable use.

And finally, in terms of modernization: the few elements of the ALS kit can be easily installed even on older telehandlers, extending their operational life and improving their performance.

The development of the ALS system takes advantage of the collaboration of TASC, "Smart and Clean Agricultural Tractors Project", a project including the participation of the main university research laboratories of the Emilia Romagna Region - Italy, created with the aim of minimizing the environmental impact of agricultural mechanization.

More energy efficiency, more productivity, greater control, high customization possibilities, higher safety and stability and the possibility of modernizing older machines represent all the advantages obtainable from the ALS system and the confirmation of the achievements through the collaboration of two Emilian and world excellences, now also recognized by the prestigious awards by EIMA 2020-21.

The unit was developed for low-voltage mobile applications and is well-suited for the needs of hybrid equipment builders facing spatial constraints.
Omni Powertrain Technologies
May 25, 2022
Follow Us