The company has evolved from creating a water-driven forge to a pioneer in high-tech digital products. 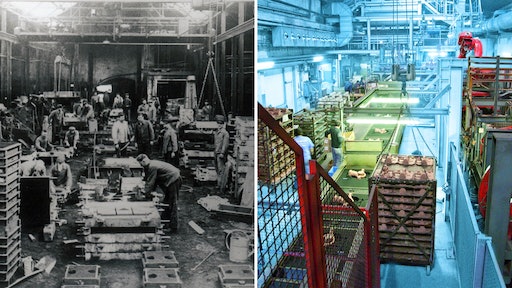 The foundry in Lohr am Main around 90 years ago and today.
Bosch Rexroth

The story began in 1795 when Georg Ludwig Rexroth launched the water-driven forge for iron production in the Spessart mountains in Germany. With this, he founded what now is one of the oldest technology companies in the world. Part of the Bosch Group today, Bosch Rexroth AG is a technology and market leader for drive and control technologies used by mechanical and plant engineering partners around the world. The company is responsible for efficient, powerful and safe movements in machines and systems of any type and size. With high-performance components and software-based solutions, approximately 31,000 employees, in more than 80 countries, are driving the digitalization and sustainability of machines and systems.

“Over the past 225 years, Bosch Rexroth has seized the opportunities offered by technological advances, turned them into innovations and adapted its business model to them,” said Rolf Najork, Managing Director of Robert Bosch GmbH with responsibility for the Industrial Technology division, and CEO of Bosch Rexroth AG, summing up the company’s recipe for success. The manufacturer of automation technologies for the factory of the future, plant construction and engineering and mobile applications is well equipped to deal with the challenges of the digital transformation.

Part of the Bosch Group since 2001

When the company was established during the French Revolution and at the start of the industrial revolution, this success was not foreseeable. The Rexroth family led the company through turbulent times and, when it took over an iron foundry, moved the company headquarters to Lohr am Main in 1850, where it remains to this day. Rexroth achieved a breakthrough at Hannover Messe in 1954 when it presented the first products from its new line of business – hydraulics. Later on, this is followed by electric drives and control systems, mobile electronics as well as linear motion and assembly technology. In 1975, Rexroth became part of Mannesmann AG. Following the merger with Bosch Automationstechnik, it has been part of the Bosch Group since 2001.

“We know from our 225-year company history how important sustainable growth is,” emphasized Rolf Najork. In its anniversary year, earlier than planned, Bosch Rexroth achieved its goal of CO2 neutrality when manufacturing all its products. And that is not all: “We develop all new solutions with a view to improving the energy efficiency of the machines and systems equipped with them and helping our customers to achieve economic success,” said the CEO.

In 2019, Bosch Rexroth invested 348 million euros in research and development. In October 2020, the company celebrated the topping out of the second building for its Customer and Innovation Center in the German city Ulm. Here, everything revolves around the future – the company plans to develop new digital business ideas, system solutions and services and work with partners on specific customer projects. The new building will house a model factory for Industry 4.0 solutions. There will also be laboratory and workshop areas, office, seminar and training rooms and an exhibition room. At the same time, Bosch Rexroth is always on the lookout for attractive new markets with potential for growth. The company is currently expanding in Africa and opened a new site in Egypt this year.

“Our origins and history are important, but a successful history isn’t enough to take you to future success. Thus, we’re moving into the future with confidence and we’ll shape the company’s third century through innovations,” said Rolf Najork. The three initiatives Transforming Mobile Machines, Connected Hydraulics and the Factory of the Future underline this goal. They bundle together Bosch Rexroth’s innovations and software-based system solutions to speed up the electronification and digitalization of mobile working machines, plant construction and engineering as well as factory automation.