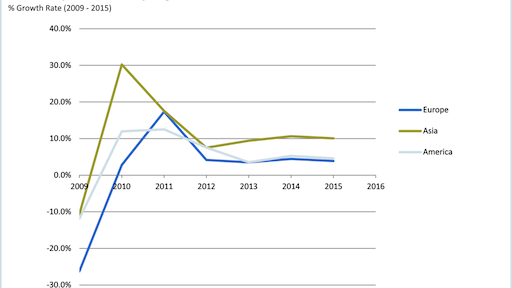 The continued global economic slowdown has had a severe impact on worldwide machinery production, with growth in all regions falling significantly in 2012 compared with 2011. According to the new Machinery Production Report from IMS Research (now part of IHS Inc.) worldwide growth in machinery production stood at 6.3% in 2012, more than 10 percentage points lower than the previous year.

Asia Pacific has coped best through the period of global economic turbulence, and has continued to grow faster than any other region. Even China, though, has seen growth in machinery output fall – down to an estimated 9.1% in 2012 (compared with 19.9% in 2011) – as a result of the weakening demand from a struggling Europe and shifting domestic monetary policies. Although this is the slowest rate of increase seen in many years, it still makes China one of the fastest growing nations.

Meanwhile in Europe the continued economic uncertainty has taken its toll. Sovereign debt problems, high unemployment and falling exports have meant that economic growth has been slow at best throughout most of Europe. For the region overall, GDP in 2012 stood at less than 1.0%, and is projected to remain as such throughout 2013, with several countries (including Belgium, France, Italy, Portugal and Spain)  expected to see declines in both years. Although machinery production is expected to outperform GDP, this backdrop is not one conducive to strong investment from Europe’s manufactures. Demand from better-performing economies, such as Asia and Eastern Europe, is not enough to prop up weak demand from the bigger Western European nations. Currently, the machinery production growth rate for Europe is forecast to be 3.5% in 2013, some way behind the 9.4% forecast for Asia Pacific. The Americas has fared reasonably well in contrast to Europe, growing 7.6% in 2012; rather faster than the 4.2% seen in Europe; within this, wind turbine production was amongst the best performing sectors, increasing by an estimated 18.7%.

Within machinery production, there was significant variation between the different sectors. The semiconductor equipment sector, which is a notoriously cyclical industry, saw steep declines in 2012; so too did photovoltaic (PV) manufacturing equipment, suffering as a result of significant over capacity. Agricultural machinery, on the other hand, has held up reasonably well, supported by strong commodity prices, indicating that amongst the uncertainty there remains areas of optimism.