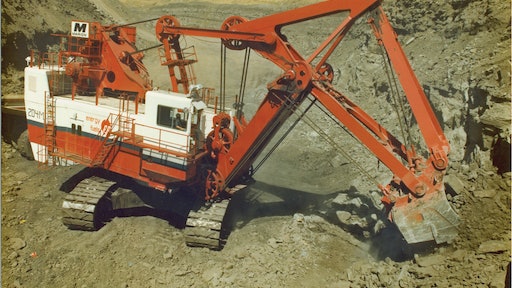 Manufacturers of loading shovels for mining applications needed to increase the digging force and efficiency of the shovel dipper without necessarily increasing the size of the overall machine. Two of these companies, Marion Power Shovel and Bucyrus-Erie, solved this problem in somewhat different ways. Marion’s answer was the Superfront.

The Superfront was based on two laws of physics: The triangle as the strongest possible structural design, and the multiplication of force in proportion to the length of a lever to which force is applied. The translation of these laws into principles was simple:

The Superfront concept originated in the mid-1960s as a means of more efficiently excavating coal from thin seams by digging in a level plane rather than an arc. As its superior digging power was realized, the concept was applied to excavating applications. After a three-yard 101M prototype tested successfully in 1967 with a five-yard bucket, two standard 191M loading shovels were equipped with Superfronts in 1972 and redesignated 194Ms.

Seventeen more Superfronts were produced from 1976 through 1988; designated model 204M, they wielded 20- to 40-yard buckets. Ten were shipped to the former Soviet Union, four to copper mines in Papua New Guinea, two to Wyoming’s Powder River Basin coal mines, and one to Australia.