The advent of the Skimmer

A Pennsylvania-based company solves problematic and ineffective steam shovel excavation capabilities with the development of the Skimmer. 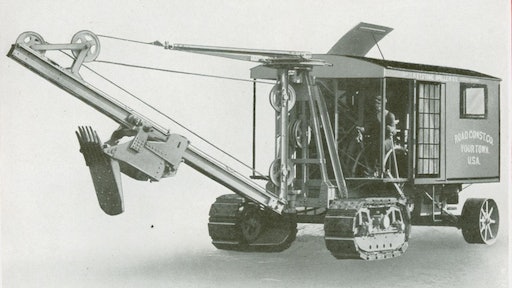 The effectiveness of a steam shovel as an excavator was largely a function of the bank against which it worked. Digging efficiency was hampered by shallow cuts. Because the bucket could only move in an arc through the cut, its passage through a low bank was brief, allowing little material to be loaded.

Removal of pavement and other thin layers was especially problematic. The bucket simply could not engage the material long enough to produce a respectable load within a reasonable time. The Keystone Driller Company of Beaver Falls, PA, solved this problem when it invented the skimmer.

The skimmer was cable-operated, and its design was simplicity itself. The boom was essentially a heavy I-beam, and rather than suspending the bucket from the boom as on a shovel or dragline, the bucket traveled along the boom. Bucket capacities were small, on the order of one-half to one cubic yard, and the bucket’s bottom was flat to produce a smooth grade.

To start a digging cycle, the boom was lowered so that the bucket engaged the surface, and the bucket was drawn away from the machine, like a dragline in reverse. To dump, the boom was raised and swung, and the operator tripped the bottom of the bucket as on a shovel. The empty bucket returned to the base of the boom by gravity as the boom returned to its digging position. By the late 1920s, the bucket bottom was tripped and reset by electricity from a 12-volt battery.

The first skimmer prototype was designed and built in 1912. The first machine was sold in 1913, and the skimmer entered full production the next year. It soon outsold what had been the firm’s primary product, the churn drill.

Skimmers were originally half-swing machines, in which the boom was mounted to the rear of the machine’s frame and swung left or right in an arc of about 180 degrees. Keystone touted the skimmer’s accuracy in fine-grading, and claimed that its half-track, half-swing mounting was more stable than a full-revolving design.

Eventually, full-revolving excavators were also offered with skimmer fronts, and a number of other manufacturers came to produce skimmers for their excavators. The concept was rendered obsolete by the late 1940s by the front end loader and the Gradall.