Constructing the Europe of tomorrow

The European construction equipment market has good prospects for 2015 as its recovery continues, though to what extent is still unknown. 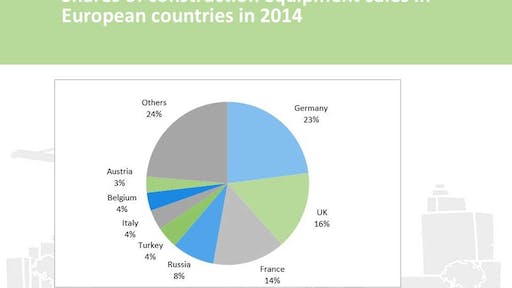 After North America, the European construction equipment market had been the most dynamic region in 2014. This was welcomed amid the troubled times the industry is going through. Still, recovery is fragile and differentiates in strength across countries and product groups.

In 2014, sales in the European market grew 9% compared to 2013. Exports also showed a slight momentum of growth. However, 2014 was first and foremost another year of great volatility and the amplitudes of market movements are still remarkably high. In Europe, the industry experienced an entire economic cycle within just one year—starting extraordinarily strong after a very mild winter, it saw an extended summer slump followed by another pick-up of demand towards the end of the year. Heterogeneity was great across countries; while the United Kingdom (UK), the strongest of the large-volume markets, saw sales growth of one-third compared to the already strong 2013, Turkey and Russia had a devastating year with market declines of 25 and 37%, respectively. Even beyond Europe, volatility was not less striking: The North American market grew by one-fifth, while China decreased by the same rate.

The good performance of the European market in 2014 was just enough to recover what had been lost in 2013. However, across all products and countries, the market is still more than 40% below the record levels seen in 2007. And again, there are huge disparities. Southern Europe remains at very low absolute levels whereas markets such as the UK and Germany are not that far away from pre-crisis levels of 2007.

During 2014, 135,000 units of earthmoving equipment were sold in Europe including Russia and Turkey. This amounts to an increase of 6% and puts the sector back to the levels of 2012. On an aggregate level, the industry lost momentum over the year. After a strong 11% increase in the first quarter, sales growth gradually faded away, and the fourth quarter even saw declines of 5%. The negative momentum is particularly attributable to Russia. Amid political tensions, the equipment market collapsed – fourth quarter sales were down 60%, and the total rate of decline for 2014 was 38%. Another problematic market was France where the economic scenario of the industry worsened significantly over the year. The full year sales growth of 2014 was still at 8.5%, but the fourth quarter was very weak and prospects for the near future aren’t any better.

Looking at the growth markets in Europe in 2014, the first one to mention is the UK. A tremendous growth of 32% pushed the earthmoving equipment market to 2nd in Europe. The German market, No. 1 in Europe, already on comparably high levels, had a remarkably stable performance and managed to grow even further by almost 10%. Nordic countries were equally stable last year and grew by 10.5% on average. In Western Europe, the Netherlands (+35%), Belgium (+11%), and Austria (+14%) were strong. Southern Europe finally delivered some signs of life, albeit on an extremely low absolute level. The Spanish earthmoving market grew by 54%, and the tiny Portuguese market grew by 69%. Italy, the only remaining volume market in Southern Europe, saw a sound growth of 20%.

When it comes to products, the general trend of 2014 was that compact earthmoving equipment performed stronger than heavy equipment. This applied in particular to mini excavators and compact wheel loaders. However, there are exceptions; skid-steer loader sales dropped by 15% and sales of loader backhoes, as a result of the bad market situation in Russia and Turkey, were down 24%. Given the currently very cautious propensity to invest by the rental sector, it is questionable if compact equipment sales can remain on a growth path in 2015.
Heavy equipment sales also grew in 2014, but the weakness of the mining and quarrying sector, lack of infrastructure investments, and the Russia crisis took its toll. Sales of large wheel loaders were down by 9%, sales of rigid haulers by 27%. Articulated haulers, crawler excavators, dozers, graders and wheel excavators saw fair growth. Recent indicators suggest the worst is over for the mining industry, which might stimulate equipment demand to some extent in 2015.

In all four quarters of 2014, road construction equipment was the best-performing of all the sub-sectors. The total sales growth amounted to 19% compared to 2013. Rates of growth were similar across product groups: light compaction equipment sales increased by 20%, while sales of self-propelled rollers were 16% above 2013 levels. Sales of asphalt pavers in Europe grew by 21%.

Looking at markets and regions, there was a similar picture observable for the earthmoving equipment sector in 2014. Western and Northern Europe were the center of stability; Southern Europe started a recovery from extremely low levels; at the Eastern tip of Europe, the picture looked worse. Translated into numbers, the UK market grew by 33%, France by 21%, Germany by 19% and the Nordic countries averaged 22%. Having in mind the limited activity in road building as a result of continued public funding constraints in many European countries, this pick-up definitely exceeded expectations. In a more long-term view, road equipment clearly is the sub-sector within the construction equipment industry that has recovered most strongly after the crisis. And a continuation of the positive trend is not unlikely. With a forecasted CAGR (compound annual growth rate) of 2.6% for the European road building sector in the next three years, there should be room for more investments in equipment.

The picture looked much less friendly for the building construction equipment sector. There are multiple reasons for weaker performance, but the major explanations are a flat building sector in Europe after two consecutive years of decline, and a statistical base effect (strong growth of equipment demand in 2013). Concrete equipment started well: First quarter sales in Europe were one-third above 2013 levels. However, from the second quarter onwards, the sector slid into the negative. Total sales in 2014 were 13% below previous year’s levels in the European markets. Since volumes of the products are comparably small, growth rates are easily distorted and should not be over interpreted.

Looking at countries and regions, the large-volume markets developed differently: Germany lost significantly (20%) while the French market grew slightly (4%). Switzerland and the UK also saw some growth whereas the Austrian market could not keep its 2013 levels. Similarly to the other equipment sub-sectors, there was some positive momentum in Southern Europe. The full extent of problems in Russia—the weak currency, European sanctions, and protectionist measures by the Russian government—became visible for concrete equipment in 2014. On a positive note, European concrete equipment manufacturers could rely on exports. The primary export definitions – in particular the Middle East and North America – were stable thanks to a good development of the residential and non-residential building sector. This trend is likely to continue in 2015 also.

The prospects are not too bad for 2015. While the general assumption for the future is a continuation of the recovery, the extent of it is more questionable. The European construction industry should be on a recovery path, with all three sectors of residential construction, non-residential construction and civil engineering having a positive growth forecast. The mining and quarrying sector, of limited relevance in Europe, might have weathered its crisis and could stimulate demand in 2015. Investments from the rental sector should remain restricted this year.

Again, much uncertainty emanates from political crises, the Russia-Ukraine conflict being probably the most severe one for the European equipment industry. A short-term recovery of the Russian market is very unlikely. The flaring up of the Euro crisis could further impede the readiness of customers to invest. According to a recent CECE survey, European manufacturers look very cautiously at the market scenario for 2015. Manufacturers of earthmoving and road equipment remain the optimistic ones whereas concrete equipment manufacturers are more hesitant.

Against this backdrop, a flat market or a slight growth appears to be the most realistic scenario for Europe in 2015. The good news for this scenario would be that Northern and Western European markets remain on high absolute levels, and the disparities between the North and South do not get any bigger.

Beyond Europe, prospects are not bad either. The North American equipment market should see a continuation of growth, even though probably on lower levels than last year. The Middle East markets seem to defy political uncertainties and remain relevant export destinations for European construction equipment. The former growth engines in Asia, in particular China and India, could find their way back to stability after a very troubled recent past.