From Fruit to Fuel

A harvester manufacturer has worked to find an efficient solution to collect jatropha, an up-and-coming biofuel source. 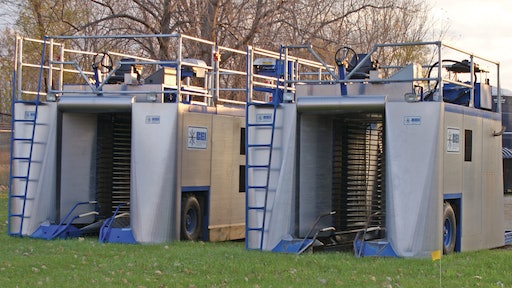 Currently growing on more than 64,000 acres in the Americas, jatropha is one of the fastest growing sources of alternative fuel. It is a drought-resistant plant able to grow in wasteland and without fertilizer, thus it doesn't need to compete with food crops for land. And, using it for fuel doesn't affect food prices, as the fruit itself is toxic.

BEI Intl. LLC, South Haven, MI, has a history of over 50 years of manufacturing agricultural harvesters. Max Lint, Bill Evashevski, and Rick and Jeff Mckibben (grandsons of co-founder H. Mckibben) purchased BEI in October 2008. The company's original intent was to manufacture blueberry harvesters, but since has come to manufacture many different types including those for grapes and more recently jatropha, the cornerstones being its blueberry and raspberry harvester designs.

Lint and his partners were looking into ways to diversify BEI's harvesting business when they were introduced to a nursery grower in Florida with the rights to distribute a variety of jatropha in North America. Able to be in the field and touch the fruit, BEI realized that, with a little design manipulation, its blueberry harvester could collect jatropha.

"Jatropha has been around for a while," says Lint, "but is getting more popular because of the yield and number of varieties that have been created in nurseries that are able to handle less irrigation and withstand many different types of environments." There are plantings in Florida, Texas, California and Mexico, and the fuel source has helped launch biodiesel programs in India, Indonesia, Brazil, Chile and other regions.

Unfortunately, a majority of jatropha is harvested by hand. With 35 to 50% of the total production cost of biodiesel expected to come from jatropha, maximizing harvesting efficiency is key. "Manually harvesting jatropha is not conducive because of the toxicity of the berry," says Lint. Plants are pruned to six to eight feet for maximum yield. At that height manual harvesting would involve ladders, and with tens of thousands of acres to harvest, that's a lot of people and a lot of time. "Mechanical harvesting allows for 24-hour harvesting at a faster and more efficient pace," he says.

A benefit of raising a fruit that is not sold whole like blueberries is being able to use a more aggressive form of harvesting. The conveyor system on BEI's blueberry machine was changed and less concern was given to separating the fruit from the stems and leaves. Jatropha harvesters often want the extras for feed stock, so the fruit is able to be bulk loaded.

The jatropha pod holds two to three seeds that contain around 50% oil used for biodiesel production. "There's a process BEI has to husk the jatropha so you end up with just the seeds. The seeds are then cold pressed to extract the oils," Lint says.

A majority of the engineering is done in-house. BEI works with many suppliers for components, including Cummins engines and Eaton's hydrostatic transmission. "The engine is actually above one of the rear tires on current harvesters," says Lint. That configuration allows for space saving and driving ease, but also highlights the importance of hydraulics, as you don't need a mechanical linkage to the wheels anymore.

A.S.V. Inc., manufacturer of compact rubber track loaders, undercarriages and traction products, recently acquired by Terex Corp., supplies the track systems to BEI. When Lint and the rest of the partners took over BEI, the company had been using imported track systems as well as ones designed in-house. A.S.V. was a respected U.S.-based company that the BEI owners wanted to utilize. "Customers appreciate the relationship, as well, especially in the long-term," says Lint.

Centipedes in the field

No, not the 100-legged arthropod. Jeff Mckibben patented a catch pan system for the harvesters called the Centipede Scale System. This system increases the yield of the fruit by 15-30%, and eliminates a lot of the potential damage to the bush while being harvested.

"The catch pan system wraps around the bush much tighter than other systems in the market and keeps the fruit from falling on the ground as the machine passes through the rows," says Lint.

The Centipede Scale System comes on every new harvester BEI puts out, and is retrofittable to any harvester in the industry, including competitors'.

As the economy has gotten worse, growers are more cautious of their spending. Blueberry prices, for example, are down, making each piece more valuable, making the Centipede Scale System an important and affordable retrofittable system to increase yield. And, with the growing interest in jatropha biofuels, increasing efficiency from manual to mechanical, and then enhancing the mechanical efficiency with the Centipede Scale System could bring in bountiful savings.

Tractor Registrations Down in First 6 Months of 2020

Despite the negative impacts of COVID-19 on the agriculture equipment industry, FederUnacoma says there is still a push toward mechanization which will aid eventual recovery.
July 27, 2020

CNH Industrial is helping lead the ConectarAGRO Association, which aims to bring the internet to the countryside and remote regions of Brazil.
CNH Industrial N.V.
July 27, 2020

In the latest episode of the new Tractor of the Year digital series, BKT and other industry experts discuss the growing importance of connectivity in agriculture.
BKT USA Inc.
July 16, 2020

A new IDTechEx report evaluates the growing use of electric vehicles and robotics in the agricultural industry.
July 13, 2020

"As we celebrate our 125th anniversary, at this unprecedented moment in history, we look to the future with confidence,” says Brand President Carlo Lambro.
New Holland Agriculture
June 15, 2020

BKT Initiates Digital Format for Tractor of the Year Awards

The digital program will consist of various episodes that will cover topics in the agricultural industry and enable the jury to evaluate award nominees remotely.
BKT USA Inc.
June 11, 2020

In general, COVID-19 has had a negative impact on most aspects of the agricultural industry and farm incomes are anticipated to be lower than originally projected at the beginning of the year.
Association of Equipment Manufacturers (AEM)
June 9, 2020