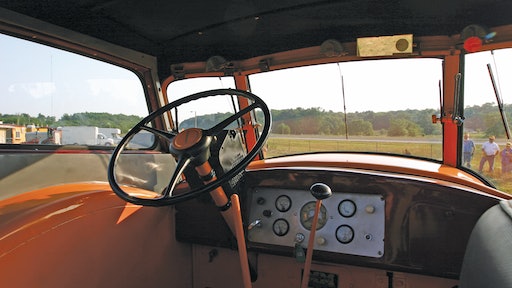 The innovative failures of the industry often rise to the top of an antique collector’s wish-list. The pioneers may have had sound concepts, but for whatever reason those ideas did not translate into sales success. Such is the case for the 1938 Minneapolis-Moline UDLX, a.k.a. Comfortractor. The first tractor with a factory-supplied enclosed cab, it was marketed as a three- to four-plow tractor and a smart-looking deluxe coupe that the farmer could use in the field or run into town for lunch.

It was a tough sell in the late 1930s, and ultimately only 150 of the tractors found buyers. Recently, examples have changed hands for more than $100,000.

It’s rare to see a UDLX at an antique tractor event, although if Minneapolis-Moline equipment is featured the tractor is often the headliner. The short, stocky Prairie Gold machine commands its share attention as it tours the show grounds. There were two restored Comfortractors, (one owned by Chuck Schneider, the other by Don Wolf) at last June’s Kalamazoo Valley Antique Tractor, Engine & Machinery Show, held on the grounds of the Gilmore Car Museum in Hickory Corners, MI.

On Sept. 23, 1938 there were five on display for 12,000 attendees of Minneapolis-Moline’s National Harvest Festival and Style Show. Three closed and two sporty open models took the stage of the Minneapolis Municipal Auditorium.

At a time when ag tractor manufacturers were just starting to offer features like padded seats, electric start and pneumatic tires, the list of options on the UDLX read more like that of an automobile. A five-speed synchro-mesh transmission gave a 40 mph road speed, while a “fully cushioned, smartly upholstered double seat” and foot-controlled brakes, clutch and throttle provided comfort and safety. In front of the operator was an automobile-style instrument panel complete with a speedometer. The cab windows — novel by themselves — were made of safety glass, and most of them could open for ventilation. There was a windshield wiper, electric horn, radio, heat, and, of course, a cigar lighter and ashtray. Surrounding all of this was a wood-framed steel cab.

Independent surveys had shown Minneapolis-Moline’s planning department that 50% of the nation’s farmers wanted a tractor with a cab. So, after three years of development which included testing in the Mojave Desert , the UDLX joined the Minneapolis-Moline lineup.

Implement & Tractor ’s editors, in 1938, reasoned that “manufacturers and their engineers may have their ideas of what a tractor ought to be, but in the final analysis it is the farmers who will determine what the tractor of tomorrow will be.”

During the ’teens the automobile industry transitioned from one where topless cars were the norm to closed coupes and sedans. Automobiles were now being used year-round, and horse-drawn conveyances were becoming obsolete on the nation’s roads. This wasn’t true for farms, however, where around 1 ½ million of the 6.8 million U.S. farmers were using tractors. Those who did have tractors were using them a meager 1,000 hours a year.

Most families had to make a choice when it came to their entry into the horseless age. Their first purchase was usually a new car. Minneapolis-Moline hoped offering a car and tractor in one easy package would be a big step toward providing the farmer with a more universal power unit.

Under the attractive exterior lurked a Model U farm tractor with an 80 in. wheelbase. The engine was a four-cylinder unit with a 5.6 to 1 compression ratio and 37.8 hp at the drawbar. In October, 1938, a Comfortractor took a 263-mile road trip from Minneapolis to the the firm’s Fargo division headquarters in 8 ½ hours while registering a respectable 10.7 mpg.

Unfortunately, the 50% who said they wanted a cab on their tractor didn’t show up to buy the UDLX — it was more like .0022%. Perhaps it was the high price tag — farmers could have purchased a standard Minneapolis-Moline U and a Ford sedan and still had money left over. Also hurting sales was the fact that many farmers weren’t willing to admit to their neighbors they’d like to have a cab. From a comfort standpoint, the cab on the UDLX trapped heat and noise. And, again, underneath that streamlined sheetmetal was a farm tractor. Travelling down the road at 40 mph in a 6,400 lb. “car” with no suspension hurt in the ride quality and handling department.

With today’s focus on operator comfort and cab features that surpass some automobiles, it surprises many young show-goers that the UDLX wasn’t a success. “The history of the tractor has proven that much can be copied or borrowed from the older automobile industry,” reported Implement & Tractor in 1938. “Will the closed body experience find a parallel in the tractor field? Time alone, of course, will provide the answer, but meanwhile a prolific field is opened for speculation.” It would be a few more decades, but time would show the closed-body tractor was the popular choice for most applications.

AEM has released its Ag Tractor and Combine Report for November 2020.
December 10, 2020

AEM has released its Canada Ag Tractor and Combine Report for November 2020.
December 10, 2020