A Positive Outlook for Agricultural Equipment

The long- and short-term views of the global agricultural equipment market both point to a growth trajectory due to food demand and technology adoption. 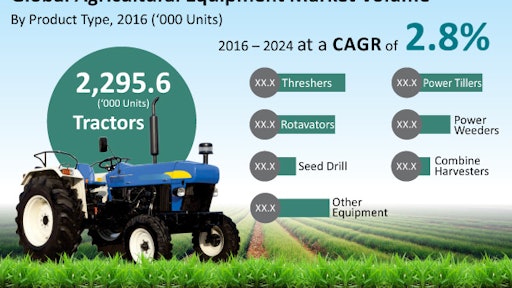 Total global agricultural equipment market volume by product type from 2016 to 2024 at a CAGR of 2.8%.
Persistence Market Research

After several years of falling equipment sales and stagnant low commodity prices, the agricultural market is finally showing consistent signs of life in several regions and sectors. According to a report by Power Systems Research, the agricultural segment could see a 2% gain in 2017 after a disappointing recovery rate in 2016 following the severe worldwide slump in 2014 and 2015 (learn more, 20862955).

Power Systems Research notes the overall market hit bottom between late 2015 and 2016, especially lower horsepower units which saw double digit growth in sales in 2016 versus 2015. Unfortunately, higher horsepower machines continued to decline in 2016, only reaching its bottom in the second half of 2016, and is not expected to have any significant growth in 2017, but rather remain flat.

Commodity prices still remain at a record low, so there is no anticipation of a rapid recovery. Instead, Power Systems Research predicts the recovery will continue to be very slow and the market will not reach its prior levels in the foreseeable future.

Providing a more long-term perspective, Grand View Research recently asserted that the global agricultural equipment market would be worth $243.4 billion by 2025. The firm notes that the rising population has escalated the demand for food and anticipates it to be one of the key drivers of increased ag equipment demand for the next several years (read more, 20860794).

Another key influencer to market demand is the increased adoption of technology in ag equipment as farmers strive to increase yield to match the anticipated food demand. The technological advancements in agriculture automation and robotics are fueling the adoption of farm equipment across the globe. And mechanization continues to be a driver for developing nations like India, China and Brazil.

Persistence Market Research is not so robust with its long-term view as Grand View Research, predicting the global ag equipment market will only reach $131.6 billion by 2024 (learn more, 20857117). The discrepancy seems connected to Persistence’s projected annual growth rate of 2.8% versus Grand View’s 7% CAGR. In addition, Persistence also notes that high interest rates for the purchase of new agricultural equipment are becoming major hurdle for farmers around the world. Inflated fuel prices in some regions will also impede faster sales rates.

Earlier in 2017, CEMA (an association representing the European Agricultural Machinery) reported that in 2016, the European agricultural tractor market had declined 6.7% compared to 2015. In Europe’s two largest markets, Germany and France, demand for equipment dropped by 10.8% and 6%. Smaller European markets like Spain and Croatia saw growth, but not enough to pull the overall European market into positive growth.

A short time later in March of 2017, stable demand for the remainder of 2017 was anticipated for Europe’s ag market, and specifically the arable farm equipment segment. “The European market for arable farm equipment in 2016 is a picture full of contrasts,” says Nina Janßen, Coordinator of the CEMA Product Groups. Some Eastern European markets, particularly Russia and the Ukraine, enjoyed significant growth rates, especially in sales of field sprayers and precision seed drills. Growth in these markets partially compensated the decline of orders from other countries (learn more, 20856185).

Massive declines in sales were recorded for France and Poland for very different reasons. In France, a poor harvest caused liquidity shortages among farmers while in Poland blocked subsidy payments exerted a negative impact on farmers’ ability to invest in new arable equipment.

CEMA’s most recent report anticipates a return to growth for the European farm machinery market in 2017 (read more, 20861439). As an overall trend, sales of smaller tractors below 50 hp and sales of larger tractors above 150 hp are increasing while demand for most power categories in between is weak. Demand for balers, mowers, sprayers, combine and forage harvests is also expected to decrease in 2017.

DLG, the German Agricultural Society, conducted a survey to determine how European farmers were feeling about the agricultural climate, and the results were positive (read more, 20862982). Both the current economic climate and expectations of business growth are viewed in a far more positive light than in autumn of 2016. There is also a renewed willingness to invest, according to the survey results.

Farmers in all four countries surveyed, Germany, Poland, France and the U.K., are significantly more confident about business growth in the next 12 months, and there is indication that demand will continue to be strong. Emerging countries in particular will benefit due to rising raw material prices boosting economic development and stimulating global demand for agricultural products.

Despite the uncertainties surrounding Brexit and its impact on agricultural policies, farmers in the U.K. are also optimistic about business growth in the next 12 months. They hope that Brexit will cut red tape and give businesses more decision-making autonomy, which could strengthen the competitiveness of producers. In addition to these mid-term expectations, favorable financial terms and the weak pound add to the favorable conditions for British agriculture. In the light of a more favorable economic environment, British farmers are preparing for their exit from the EU and strengthening their competitiveness through investments.

On the cusp of change

One broad trend that is taking over the agriculture machinery market, and has been for years, has been technology. Autonomously driven tractors, for example, have been common and in use for years in farming. To put it in perspective, an IDTechEx report, Agriculture Robots and Drones 2017-2027: Technologies, Markets, Players, predicted the number of GPS-enabled assets in farming will rise to nearly one million by 2024. In 2006, the industry only held 107,000 autonomously driven vehicles, and that number had ballooned to nearly 430,000 by 2016 (learn more, 20862505).

So, while some regions adopt precision data products and robotics, other regions of the world are working on increasing mechanization. These starkly contrasted paths in agriculture will need to be monitored closely and separately to ensure the global marketplace’s specific demands are being delivered and addressed.

The first half of the year has been positive for the Italian agricultural machinery market. According to data elaborated by FederUnacoma based on registrations provided by the Ministry of Transport, the mid-year turning point for tractor sales and all other types of targeted machinery requiring registration were showing net growth over the same period in 2016.

Tractor sales rose 9.7% with 9,978 units registered against 9.096 in the first half of 2016; combine harvesters climbed 14.1% with 186 machines moved compared to 163; transporters gained 5.3%, 416 units against 395; trailers were up 3.5%, 4.755 sold compared to 4,594; telescopic handlers surged 16.8% for 472 registered against 404 in the first half of 2016. The opening of applications for financing provided by European Union Rural Development Plans came as an incentive for farmers to purchase and the activation of the procedure for obtaining INAIL funds can further improve this positive market trend.

Germany's agricultural machinery industry is looking back to a turbulent business year 2016. While the downward trend of the past year has significantly slowed down, with a production turnover of EUR 7.2 billion, the industry still falls short of the growth zone. “A 2% decline is certainly no reason for euphoria, but certainly for cautious optimism, more so since producer prices, especially for milk, are clearly picking up,” says Dr. Bernd Scherer, Managing Director of VDMA Agricultural Machinery.

The strong growth in incoming orders has been providing a boost to the industry since the fourth quarter of the past year. The agricultural machinery business went especially well in the Eastern European territorial states of Russia and Ukraine, which the industry considers the most important future markets with a high sales potential.

ZETOR TRACTORS a.s. is approaching a new partner on the supply and production of ZETOR tractors in Russia. There has been intensive negotiation going on about cooperation with Kovrov Electromechanical Plant (KEMP) Company from the Vladimir region east of Moscow, Russia. The negotiations involve supply of components of ZETOR tractors and subsequent assembly of tractors in the partner’s premises. Currently, the first components are being shipped to Russia; their assembly shall follow subsequently. Entering the Russian market is considered a milestone in the history of the brand.

"Entering the Russian market is a promise of strengthening the position of the brand in an area with a strong potential and establishing our place on the market,” says Margaréta Víghová, Corporate Communications Director at ZETOR TRACTORS.

AGCO in the News

The agricultural equipment manufacturer has made several major announcements already in 2017. First is its investment in Glass assisted reality technology which allowed the company’s production facilities to reduce production time 25% and inspection time by 30%. The success of Glass in the company’s Jackson, MN, facility encouraged AGCO to not only double the number of devices being used in Jackson, but also introduce Glass to six additional factories.

Learn more about AGCO’s use of Glass at www.oemoffhighway.com/20867952.

The second major announcement was the confirmation that AGCO would be acquiring Precision Planting from The Climate Corporation, which will help strengthen its position as a leader in planting technology.

“Precision Planting is a strong business that plays an essential role in the growth and adoption of innovative precision ag practices that help farmers enhance their productivity,” says Mike Stern, Chief Executive Officer for The Climate Corporation. “As a leading global equipment manufacturer, AGCO is uniquely positioned to enable broader distribution of Precision Planting technology and will continue the development of innovative products that improve the efficiency and productivity for farmers around the world.”

Find out more about The Climate Corporation and the acquisition at www.oemoffhighway.com/20970653.