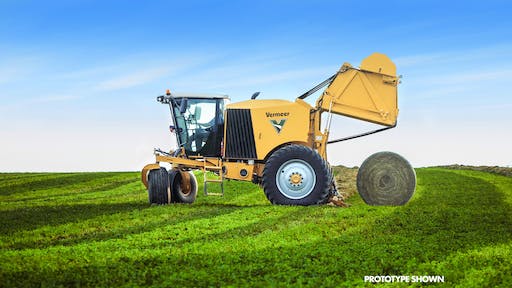 In 2017, agricultural OEM Vermeer introduced its ZR5 self-propelled baler aimed at increasing farmers’ productivity. While balers are traditionally an implement pulled by another piece of equipment such as a tractor, the process is susceptible to efficiency losses.

Josh Vrieze, Product Manager at Vermeer, says with baling specifically turning in the field is where efficiencies are lost. This is because the piece of equipment pulling the baler usually needs to make a wider turn which can lead to windrows being missed and customers having to go back over those areas, negatively impacting productivity.

To overcome this issue, Vermeer decided a self-propelled machine with zero-turn capabilities was the answer. “By being able to zero turn within a field, you gain some incredible efficiencies,” says Vrieze. 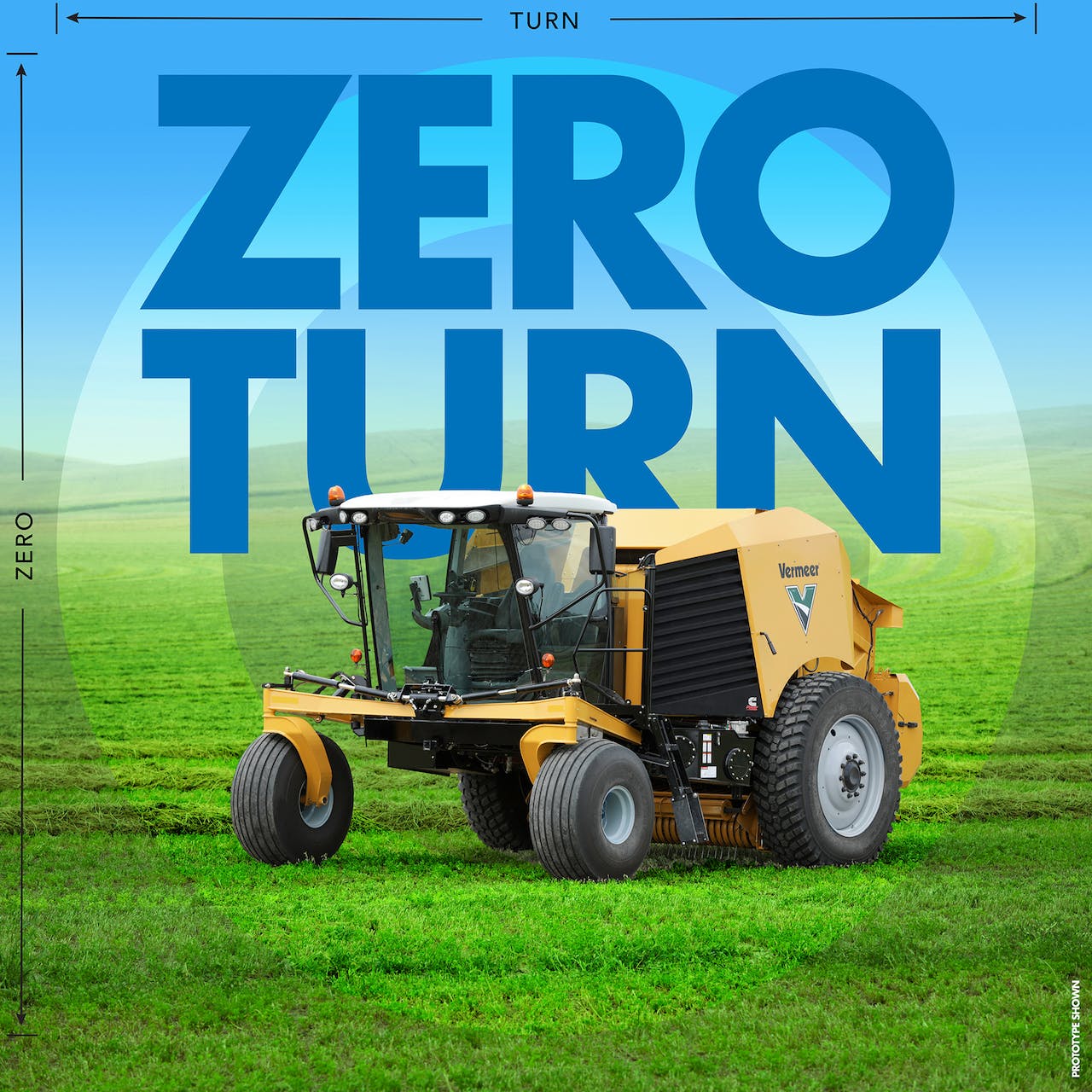 The ZR5 is a ground-up design influenced by zero-turn mowers to enable an improved turn radius in the field, and thus increased productivity. An engineer at Vermeer saw the efficiency gains he was getting with his zero-turn mower compared to his old garden tractor and looked at applying the same concept to the ZR5, seeing similar efficiencies could be gained while baling hay due to the identical maneuvers made in both applications. “We're doing the same thing in a hay field [as a zero-turn mower],” says Vrieze. “We're driving straight down a windrow, turning around and coming straight back for the most part.”

Vrieze says the machine is hydrostatically driven and uses controllers to help make all aspects work together; while the components it uses are not anything out of the ordinary and similar to those found in other types of equipment, he notes some were brand new designs developed by Vermeer for the ZR5.

The baler portion of the machine is based on Vermeer’s 605N platform, and shares many of the same components such as belts and baling technology. What is different about the ZR5’s version is the fact the baler is hydraulically powered instead of driven by a PTO.

According to Vrieze, hydraulically driving the baler allows features not possible with a traditional tractor-baler combination. These include the ability to vary speeds and turn some functionalities on and off. It can all be done automatically, as well. “It really saves you a lot of steps and makes the baler more efficient, and the whole baling process more efficient,” he says.

For instance, when getting ready to tie a bale the speed at which this can be done is limited by how fast the belts in the baler are spinning. Driving the baler hydraulically, though, enables the speed of the belts to be increased and the tying of the bale to be completed faster. “A process that used to take several seconds we're able to speed up by close to 50%,” he says.

The automation capabilities of the machine are also beneficial to making the bale tying process faster, and improving overall productivity and efficiency for farmers. Vrieze says in a traditional tractor-baler combination, there are a lot of steps involved in the baling process—stopping the tractor, waiting for a hay bale to be tied, pulling a lever to open and close the tailgate then driving the tractor again. “All of those things are automated with the ZR5,” he says. “It will stop automatically, tie automatically, open and close the tailgate automatically. The only thing it asks you to do to start again is to hit a ‘go’ button.

“That’s all there is to it is [pressing] one button during the baling process, and steering [the machine],” he adds.

Automating all of these processes makes operation simple for customers and helps make their jobs easier so they can get work done faster and not be as tired by the end of the day.

By making the baler a self-propelled piece of equipment, improvements to operator comfort can be achieved, as well. Vrieze says customers would tell the company that when baling they would go as fast as they could while staying in the tractor seat. “Generally, with a tractor pulling a baler, you’re not limited by the baler’s capacity [but instead] by the customer literally being able to stay in the seat,” he explains. “So we wanted to help with that efficiency as well.”

Designing the implement and tractor as a single unit allowed Vermeer to integrate a suspension under the cab capable of minimizing the bumps and jostles often felt when going through a field while baling hay.

Although some suspension is included on tractors, Vrieze says it’s often located at the front of the machine whereas the cab is further back and not able to benefit from the inclusion of a suspension. “Although a lot of tractor manufacturers do now put some suspension within the cab, it's not quite enough for a lot of our users when they're pulling an implement,” he says. 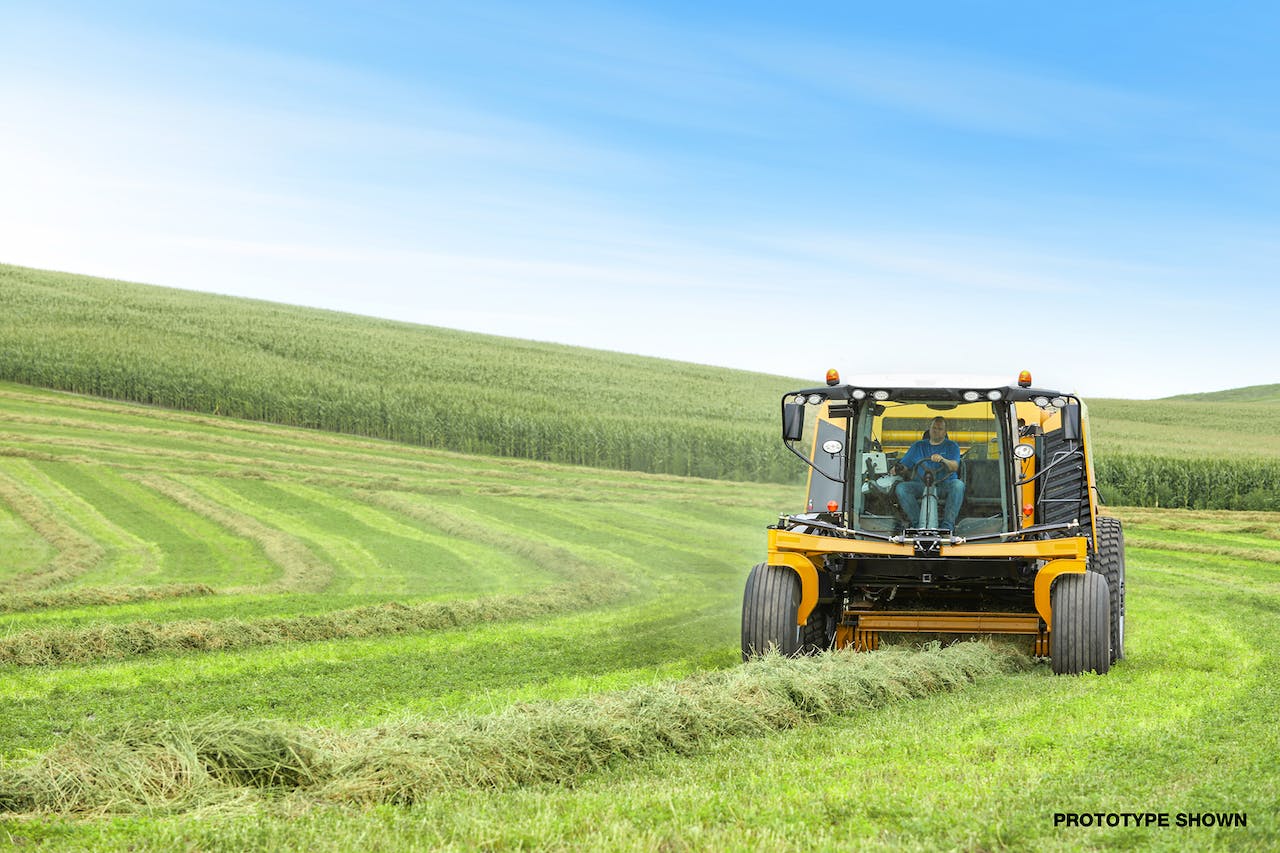 For the ZR5, Vermeer has placed the operator cab directly over the independent suspension system. This eliminates any bumps operators might otherwise feel while traveling through the field, ensuring they don’t have to slow down to drive over bumps but can instead keep moving comfortably at a faster pace and not lose any productivity.

Making the baler a self-propelled machine eliminates the need for operators to turn and monitor their progress as they typically would when using a separate tractor and baler combination. “You’re straining your body quite a bit,” Vrieze says of traditional baling setups. The ZR5, however, has several cameras to allow easy monitoring for operators.

He notes there is a camera at the pickup of the baler so customers can see hay entering the machine, and one behind it to allow visibility of the bale rolling out of the machine, as well. “Those are two areas where people were turning around a lot and felt like they had to drive slower and were straining their body,” he explains. “By having them look straight ahead now and just look at the screen that's in front of them, it makes them feel a lot more comfortable.”

As of September 2018, Vermeer had a few ZR5-1200s running with customers. In 2019, it has moved toward increased production of the machine, providing customers the opportunity to utilize the machine and see the benefits it can offer. “Efficiency gains are the big piece we see with [this machine],” that will appeal to hay and forage producers concludes Vrieze.

CLAAS is encouraging farmers to get their orders in during the company’s Pre-Sell Program period to help with production planning and ensure timely delivery.
CLAAS of America Inc.
August 13, 2021
Follow Us