CEMA reports sales expectations for most European countries are cautiously positive for 2017. 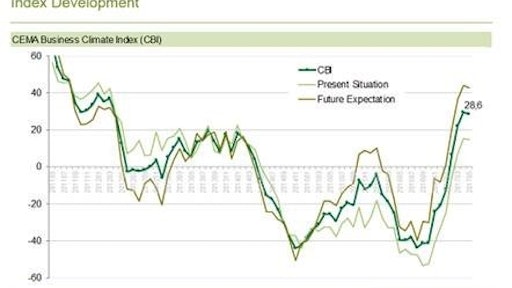 The European farm machinery market is expected to return to growth again in 2017. Sales expectations for most European countries are cautiously positive, as CEMA’s Business Barometer continues its steady increase, reaching its highest monthly value in May since 2012.

Notwithstanding the positive mood in the industry, the overall European tractor market still decreased slightly during the first quarter of 2017, even if only by a mere -1.3%.

As an overall trend, sales of smaller tractors below 50 hp and sales of larger tractors above 150 hp are increasing while demand for most power categories in between is weak.

Demand for balers, mowers, sprayers, combine and forage harvests is also expected to decrease in 2017, according to the economic experts from CEMA’s national member associations.1

For Europe’s two biggest markets, France and Germany, the overall outlook for agricultural machinery remains somewhat mixed. In France, the market was -8% smaller in 2016 in comparison to 2015. For the first semester of 2017 it is expected that this trend will continue at a similar rate. The only machine market that is escaping the negative trend is the one for forage harvesters.

In Germany, the market for agricultural machinery experienced a -5% decrease in 2016. However, it now seems that the market is slowly bouncing back with a small increase expected for 2017. In Germany, it is mostly the forage harvesters’ and balers’ markets that are expected to increase. For the other machines, the market is stable or expected to grow only at a small rate.

The agricultural machinery market in Italy shows a steady decline since 2012, with a decline of -3.7% in 2016. For 2017, the market is expected to further decrease by -2.2%. The main reason is the slow replacement rate of tractors due the low income of farmers.

As expected, the Brexit decision has had a certain impact on the UK market. While the weakening of the pound improved the financial position of UK farmers, it made imported machinery more expensive. 2017 is expected to see a flattening of the UK’s agricultural machinery market after a -2% decline in 2016. The tractor market is expected to grow again from a 15-year low in 2016. An improvement is also expected for seeders and feed mixer wagons, while the market for drills and tedders is decreasing after a strong 2016. For most other machine types, demand is expected to remain more or less stable.

In the Netherlands, tractors and sprayers are the machine types for which demand is expected to be lower in 2017 in comparison to 2016. For tractors, this is a continuation of the trend of the last years. For mowers, balers, combine and forage harvesters a small increase of demand is expected. Overall, the Dutch market will likely remain stable.

The market in Belgium decreased in 2016, and a stable market is expected for 2017. Demand for tractors was down by -3% and is expected to decline by approximately -10% this year. Next to the tractor market, most other machine types experienced a small decline in 2016 and are expected to further decline or at best remain stable in 2017. The only exception is the forage harvester market which grows slightly.

In Austria, the market for agricultural machinery went up by 5.4% in 2016.

Barometer continues to brighten up

In general, the business outlook is somewhat more positive for foreign markets (outside the one described above). This is expected to boost production in several countries, despite weak domestic demand. It also explains the increasingly positive mood amongst manufacturers responding to CEMA’s monthly Business Barometer survey.

The Barometer clearly shows sharply increasing business expectations for the coming months. Whereas, in October 2016, a majority of companies expected a shrinking or stable market in the 6 months to come, a majority of 53% now expects their turnover to grow in the next 6 months.

As a monthly survey that is sent to the European agricultural machinery industry and covers all the major product categories, the CEMA Barometer provides a regular overview of the business mood based on current business sentiment and the expected turnover in the next 6 months.