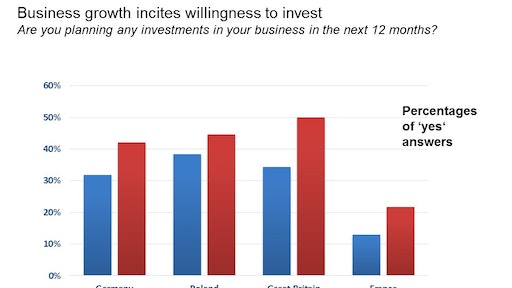 European farmers can finally see light at the end of the tunnel, suggesting that the sense of despondency that prevailed in 2016 has lifted. Both the current economic climate and expectations of business growth are viewed in a far more positive light than in autumn 2016. There is also a renewed willingness to invest. These are the main results of this spring's DLG Trendmonitor Europe, a survey of 700 German, 700 French, 500 Polish and 350 British farmers.

Presenting the findings, the DLG Director of Economics, Dr. Achim Schaffner, explained the upswing was due to the improved market situation for cereals, milk and pork. Cereal prices are picking up again after the 2016 slump. In DLG’s home market of Germany, for example, cereal exports are well up on the previous year and prices have recovered, although they remain at a modest level compared with recent years. A shortage of pigs compared with the previous year, meanwhile, has been accompanied by continuing strong demand. With exports particularly buoyant, pig farmers across the EU can expect strong prices. In addition, the profit margin in pig farming has improved. Rising producer prices since the start of the year contrast favorably with falling costs for protein feeds and sustained moderate prices for feed grain. This has improved the overall profitability of pig production.

Milk is also in short supply, with EU-wide milk supplies down on last year. This is compounded by the fact that supplies from the world's leading milk exporting countries are below last year's level, although milk exports from New Zealand are starting to pick up again. This supply situation, combined with dynamic growth in cheese and butter exports, is commanding higher prices.

French, Polish and British farmers, just like their German counterparts, are benefiting from the more favorable environment and see the current economic climate in a far more positive light than in autumn 2016. French pig farmers have succeeded in significantly increasing pork exports to China at a time when supplies are declining, and the resulting rising price level has stabilized the business situation of the country’s farmers, leading to a more upbeat assessment of the current economic climate.

Farmers in all four countries surveyed, Germany, Poland, France and the UK, are significantly more confident about business growth in the next 12 months. With milk and pork expected to remain in short supply and dynamic export growth driving healthy sales, this combination of a fairly tight supply and high demand should at least lead to strong prices. And there are good indications that the strong demand will persist. This has prompted the International Monetary Fund to predict an upward trend in global economic output, which will be of particular benefit to emerging countries. This is because rising raw material prices are boosting economic development and stimulating global demand for agricultural products.

Despite the uncertainties surrounding Brexit and its impact on agricultural policies, farmers in the UK are also optimistic about business growth in the next 12 months. They hope that Brexit will cut red tape and give businesses more decision-making autonomy, which could strengthen the competitiveness of producers. In addition to these mid-term expectations, favorable financial terms and the weak pound add to the favorable conditions for British agriculture.

French farmers too are significantly more confident about business growth in the coming months. Rising pork exports and the improved situation in the dairy market have restored confidence in further business growth. Conditions are significantly better than in 2016, when the economic climate was shaped by poor grain yields and low milk prices. Farmers in France also hope that the recent introduction of origin labeling for milk and meat will boost domestic sales.

The Trendmonitor Europe survey reveals that German dairy and arable farmers in particular are more optimistic about business growth in the next 12 months, with exports of cheese, butter and cereals all expected to remain buoyant. Following the despondency reported in 2016, this at least warrants modest expectations for further business growth in the year ahead.

However, despite current growth, willingness to invest in Germany, Poland and France remains below the average level for the past 10 years. Having struggled with low prices for 2 years, livestock farmers are still focusing on strengthening their solvency. Moreover, in the four-year period from 2010-2014, strong investment confidence was marked by investments in expansion and modernization. Consequently, the current four-year period is characterized by replacement investments and a consolidation of operations. In contrast, the willingness to invest in the UK is now at the same level as the boom period of 2010-2014. In the light of a more favorable economic environment, British farmers are preparing for their exit from the EU and strengthening their competitiveness through investments.

The picture for the pig sector shows more modest changes in the willingness to invest, with 50% of farmers surveyed in Poland planning to invest in the next 12 months (+6 percentage points compared with autumn 2016), 50% in the UK (unchanged) and 30% in France (+14 percentage points).

Farm managers face a number of challenges despite the generally more benign business environment. The challenge for German farmers is to maintain solvency in the face of fluctuating prices and to ensure social acceptance – issues that have preoccupied farmers in recent months as they have been working on suitable farm management strategies.

Cutting production costs and the reform of the agricultural policy are the main challenges facing British farmers. Direct payments are expected to fall after Brexit, so farmers must cut costs to make up the anticipated shortfall. With investments aimed at improving productivity, farm managers in the UK are charting a post-Brexit course.

No one issue dominates the picture in France, where farmers give equal weight to the challenges of ensuring liquidity, reducing production costs, reforms to the agricultural policy and the uncertain investment situation regarding tougher environmental and animal welfare standards.

Farmers in Poland see ensuring liquidity at a time of fluctuating prices and the uncertain investment conditions as their greatest challenge.