FederUnacoma reports tractor sales fluctuated across the globe with some regions seeing an increase while others saw sharp declines. 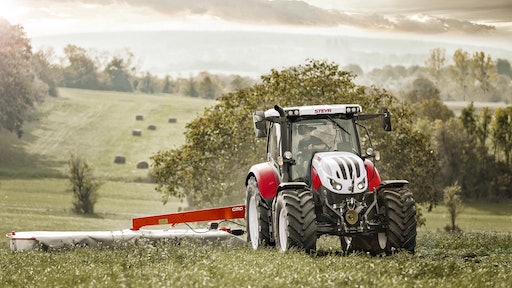 FederUnacoma, the Italian agricultural industry association, recently announced figures for tractor sales in 2019. Overall, the global tractor market was uneven as some regions saw an increase in sales while other reported strong declines.

"The United States recorded a 3.6% growth in sales with 245,000 units," said Alessandro Malavolti, President of FederUnacoma, during a press conference held in Verona as part of Fieragricola–a biennial agricultural industry show held in Italy. "The European Community also closed the year with a significant increase, with 8% on the basis of 178,000 registered tractors, albeit with different performances from country to country.

Russia was one of the countries that showed a positive trend, which in October was setting a growth of 15% and which is believed to have ended the year with a significant increase (albeit related to a limited number of machines - about 25,000 - for a country of that size). The markets of India, China and Turkey show a different tone.

The final balance relating to the Indian market - issued by the national manufacturers association TMA - indicates for 2019 a total of 723,000 tractors, down 10% compared to the previous year, but in any case such as to confirm the Subcontinent as the largest market in the world by far in terms of units. The decline recorded in India is seen by analysts as a physiological adjustment after the impressive increase that characterized the last few years, and the prospects for the Asian giant remain positive also for the next few years given the conspicuous support plans for the agricultural economy fielded by the government.

"The situation is more critical in the Chinese market," said Malavolti "which is estimated to have decreased by 20% during the year, due to the specific difficulties of the sector, in addition to the overall slowdown in the agricultural economy (insufficient productivity due to the small farm sizes and reduction of public subsidies for the purchase of agricultural machinery).

The negative phase in Turkey is ongoing, triggered by a combination of political, economic and monetary factors, which in the first nine months of 2019 marked a drop of 54%, after the very substantial drops already recorded last year.

"The trend in 2019 is positive in the United States, France and Germany, which are the three main outlets for agricultural machines produced in Italy," explained Malavolti "and this is positively reflected in our exports. In the first 10 months of 2019, according to ISTAT data on foreign trade, exports grew overall by 2.5% in value compared to the same period of 2018, even if with a different trend for tractors, which marked a drop of almost 1%, and for the other agricultural machines which instead showed an increase of 3.7%. The overall turnover of exports of Italian machinery in the ten months amounts to almost 4 billion euros."

As regards the outlook for the current year, the Agrievolution forecasting observatory as well as the Business Barometer of the CEMA European Manufacturers Committee indicate a general market decline, at least in the first months of the year. In addition to the Far East and Europe, the North American and the Eastern European markets are also expected to contract. Together with tractors, the decrease should also concern the other types of machines and equipment, see for example machinery for tillage and crop protection, which CEMA expects to decline on the European continent. On the eastern front, an important variable is the epidemic in progress in China, whose consequences on the primary economy and on trade are still to be assessed.

Italy records a stagnant trend, with a growth of 0.7% for tractors at the end of 2019, corresponding to 18,579 registered vehicles. Malavolti said this figure confirms how the national market has stabilized in recent years, with an average of 18,400 units in the 6 years from 2014-2019 (excluding the anomalous figure for 2017, which was biased, as we all know, by the forced registration of tractors in stock before the entry into force of the new EU approval standard).

"On a market that has shown constant overall volumes in recent years," observed Malavolti "there is a notable disparity between regions, with annual balances that perform sometimes better and sometimes worse than the national average. 2019 closed with a national average of +0.7%, with registrations of tractors recording a peak in Emilia Romagna (+21.4%), in Lombardy (+10.2%), in Lazio (+14.2 %), while other important agricultural Regions suffered sharp decreases: -25% in Campania, -5% in Piedmont, -3% in Puglia and -18% in Sicily."

Apart from the greater or lesser capacity of individual administrations to use public funds for the purchase of agricultural vehicles, the noticeable fluctuation in sales statistics depends to a large extent on the timing of the tenders, which produces rapid increases in registrations followed by phases of stasis. "The Federation of manufacturers is working to raise political and administrative awareness on this matter," noted Malavolti "so that there may be greater continuity and better coordination between the regions in planning the tenders, and the manufacturers can better plan production and distribution, avoiding those peaks and falls in demand that negatively impact the overall economy of the system.

In assessing the performance of the national market, it is fundamental to analyse the profitability of agriculture, and therefore its ability to make investments to improve its technological equipment. In 2019, Italian agricultural production decreased by 1.3% in volume due to the negative trend in the production of wine, fruit and grains, with the gross added value falling by 2.7% and the income dropping by 2.6%. The decline in agricultural incomes, moreover, is a constant trend in our country and this has long penalized the purchase of machines even if there is a real need for technologies. In short, the market for new vehicles does not faithfully reflect the current demand at national level. This is revealed by the data on used tractors, whose sales are growing dramatically."

The FederUnacoma statistical office constantly monitors the second-hand market, based on the transfers of ownership registered with the Ministry of Transport, and a worrying trend is emerging. In 2019, compared with the 18,579 new tractors sold on the national market, the sales of used tractors amounted to 39,800 units, so more than double the brand new vehicles. "The figure is even more alarming," observed Malavolti "if you look at the increase percentages: while the new market records, as mentioned, a growth of 0.7% compared to 2018, the second-hand one grows by 5.3% (the changes in ownership were 37,800 in 2018). Looking at the period from 2014-2019, registrations of new machines grew by just 2.2%, while those of used machines grew by 60.7%."

Mixed Results for Tractor and Combine Sales in January