Under the award, Oshkosh will produce 1,661 FMTV trucks and 31 trailers which feature over 80% part commonality to help streamline maintenance, training and cost efficiency. 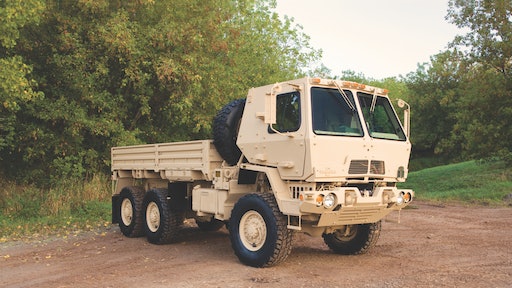 The U.S. Army has awarded Oshkosh Defense LLC, an Oshkosh Corporation company, a $409 million contract to produce 1,661 Family of Medium Tactical Vehicle (FMTV) trucks and 31 trailers, under Order Year 7 of the current FMTV contract. Deliveries will continue through July 2018.

"Oshkosh is pleased to continue delivering highly reliable Medium and Light Medium Tactical Vehicles to the U.S. Army,” says Patrick Williams, Oshkosh Corporation Vice President and General Manager of Army Programs. “Since 2009, Oshkosh has achieved record quality performance on the FMTV program, while far exceeding vehicle quantities during the initial years of the contract. Together with TACOM, we have successfully integrated more than 1,000 engineering changes (ECPs) that have improved the quality, reliability and manufacturability of the MTVs and LMTVs.”

The current generation FMTV A1P2 is comprised of 17 models ranging from 2.5-10 T payloads, enabling the vehicle to perform a wide range of missions, and to support combat missions, relief efforts and logistics and supply operations. The Oshkosh FMTV seamlessly integrates technologies needed on the battlefield and in support of Homeland Security. The vehicles feature a parts commonality of more than 80%, resulting in streamlined maintenance, training, sustainment and overall cost efficiency for the U.S. Army, Army Reserves, National Guard and U.S. Air Force.

Oshkosh Defense was first awarded the FMTV contract in 2009 and to date, has delivered more than 35,000 FMTV trucks and trailers while saving U.S. taxpayers more than $2 billion. During its seven years of FMTV production, the U.S. Department of Defense recognized Oshkosh Defense with the Value Engineering Achievement Award (in the Contractor category) for reducing product life-cycle costs while improving performance and reliability. The U.S. Army Tank-automotive and Armaments Command (TACOM) Life Cycle Management Command (LCMC) nominated its Industry partner for the award based on Oshkosh-proposed improvements that resulted in $10.7 million of cost savings for the U.S. Army.

This data and connectivity are no longer an option for OEMs but a requirement.
Lori Ditoro
January 9, 2023
Latest
Military