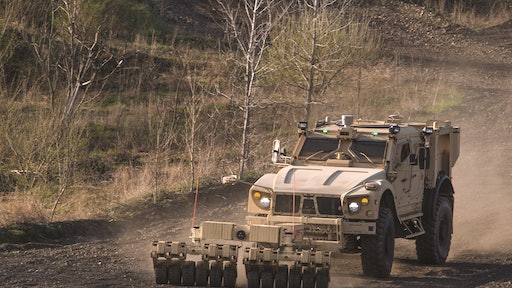 The Oshkosh TerraMax UGV technology delivers both force protection and force multiplier capabilities to the modern battlefield. Vehicles outfitted with the TerraMax system provide a force protection advantage by removing operators from the vehicles entirely, and creating a safe standoff distance from threats such as improvised explosive device (IED) attacks. The TerraMax UGV technology can enable a traditional tactical vehicle, such as the M-ATV or the Family of Medium Tactical Vehicle (FMTV), to be turned into a fully integrated autonomous vehicle system that can serve as a force multiplier by enabling a single operator to supervise up to five unmanned vehicles during convoy, reconnaissance and route clearance operations.

“With TerraMax, our military customers can enable traditional light, medium and heavy manned vehicles into UGVs to reduce exposure to threats for troops and minimize the manpower required for logistics operations,” says John Beck, Chief Unmanned Systems Engineer for Oshkosh Corporation. “TerraMax UGV is a next-generation battlefield system with an open system architecture to easily integrate additional capabilities on to any tactical vehicle.”

The Oshkosh TerraMax UGV technology has proven capable of being seamlessly integrated into convoy operations during live-force military evaluations and has been tested in virtually every manner of tactical environment. Unlike remote-controlled or tele-operated systems, TerraMax UGVs leverage the latest robotics technology that enables the vehicles to perceive and navigate complex, off-road environments entirely unmanned, with minimal operator supervision. Oshkosh has the engineering, production, installation and support capability to enable the military to quickly transition UGV technology from concept to combat zone.