The U.S. Army has placed an additional $176 million order for Oshkosh JLTV vehicles. 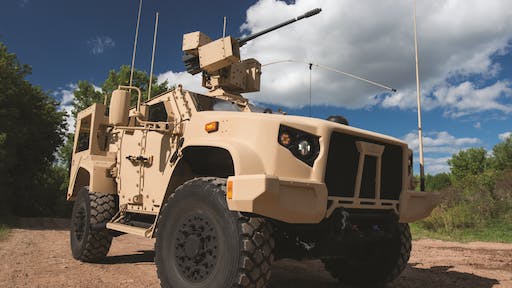 Oshkosh Defense LLC, an Oshkosh Corporation company, announces that the U.S. Army has placed another order for the Joint Light Tactical Vehicle (JLTV) program including 409 vehicles, 1,984 installed kits, 82 packaged kits and related services and support. The order valued at more than $176 million, is the fourth order for JLTVs since the contract was awarded in August 2015.

“The JLTV program is providing our Soldiers and Marines with the world’s most capable light tactical vehicle,” says Dave Diersen, Oshkosh Defense Vice President and General Manager of Joint Programs. “We have begun delivering low rate production vehicles to the Army and Marine Corps for government testing in environments around the country and we have been pleased with its performance thus far.”  The vehicles and kits for this order will begin delivery in late 2017.

U.S. Soldiers and Marines can expect: