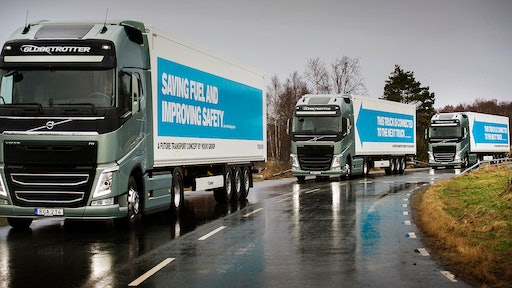 “With the signing of this landmark law, Michigan now leads the nation in the rollout of commercial truck platooning,” says Josh Switkes, CEO of Peloton Technology, a developer of connected and automated vehicle systems. “We are proud to be working with forward-looking state leaders like those in Michigan who prioritize prudent, driver-assistive truck automation systems that will provide strong economic benefits and improve the safe, efficient movement of goods."

A minority of the states in the U.S. have numeric minimum following distances that apply to commercial vehicles, ranging from 100-500 ft. These rules represent a hurdle to truck platooning, which integrates technologies including vehicle-to-vehicle communications, adaptive cruise control and collision avoidance systems which did not exist at the time the rules were enacted. These new technologies significantly improve the safety of commercial vehicles while also allowing for closer prudent following distances, as the rear truck in a platoon can respond to braking by the lead truck in approximately 10 milliseconds, bypassing a lag in driver perception and reaction time.

“We are committed to advancing safety and efficiency in commercial trucking operations and accelerating the economic benefits that result from improving the movement of goods,” says Kirk Steudle, Director of the Michigan Department of Transportation. “Michigan is proud to be a leader in paving the way for the deployment and growth of vehicle platooning technologies.”

Under the new law, the Michigan Department of Transportation and Michigan State Police will review plans submitted to the agencies by the operators of platoons before vehicles are allowed to platoon on the state’s roads.

The law also requires that truck platoons allow access for other vehicles to move safely between platooning trucks. In addition, drivers holding a valid commercial driver license must be behind the wheel of every truck in a platoon.

“It is tremendous to see this leadership by Michigan which will accelerate progress across the nation. We are actively working with Michigan to develop our plan for initial and ongoing platooning operations in the state,” says Steve Boyd, Peloton’s VP of External Affairs. “Our plan includes early activities to promote public awareness on the key role of professional drivers in our truck platooning system and the safety, efficiency and mobility benefits that this technology provides to fleets and the public.”

Peloton previously held a multi-day demonstration of its driver-assistive platooning system in Michigan in September 2014, in partnership with Tier 1 automotive suppliers DENSO and Meritor WABCO, during the World Congress on Intelligent Transport Systems hosted by Detroit. Since then, Peloton has expanded its partnerships with truck manufacturers and suppliers and is currently safety validating production-level hardware. While 11 other states have approved testing and trial activity, Michigan is first in the country to support deployment of platooning in commercial fleet operations. Peloton is preparing a general plan for platooning operations to submit to the State of Michigan as required by the new law.

Due to reach commercial trucking fleets in 2017, Peloton’s two-truck system provides a wireless communications link between the active safety systems of heavy trucks, enabling pairs of trucks to coordinate their speeds and maintain a safe, aerodynamic following distance. The Peloton system intelligently orders pairs of trucks by weight and braking ability and determines their optimal following distance—typically between 36 and 80 ft. The North American Council for Freight Efficiency has validated fuel savings from the Peloton system of 4.5% for the lead truck and 10% for the follow truck in a two-truck platoon.

Similar to adaptive cruise control, which already is used widely in the trucking industry, the Peloton system controls vehicle speed by applying automated brake and throttle commands. Drivers in a platoon retain steering control, and can choose to dissolve platooning in response to changing conditions. Platooning is a new approach to the long trucking tradition of team driving.

Because it automates a single driving function—speed—while leaving other aspects of driving to professional truck drivers, the Peloton system qualifies as a Level 1 “driving automation system” under the J3016 definitions of the Society of Automotive Engineers International, which were adopted by the National Highway Traffic Safety Administration in its Federal Automated Vehicles Policy issued in September 2016.

The Peloton system employs DSRC, cellular LTE and WiFi communications to connect trucks to each other and to an Internet cloud-based Network Operations Center (NOC) that provides continuous management and supervision of platoons. The NOC limits truck platooning to appropriate road, weather and traffic conditions. Its geo-fencing function will ensure that any platoons which are authorized to operate in Michigan can adjust operations before crossing into states that have different rules for platooning. Some nearby states, such as Ohio and Pennsylvania, have approved testing of platooning, while policy discussions are underway in Ohio and several other states towards commercial approval. Across the nation, states that have approved platooning testing or trials are Texas, Tennessee, California, Ohio, Alabama, Arizona, Colorado, Florida, Nevada, Pennsylvania, Virginia and Utah.