October Trucking Conditions Index Declines, but on Path to Improvement

The FTR Trucking Conditions Index for October declined to a reading of 2.84, but is on course to reach improved conditions. 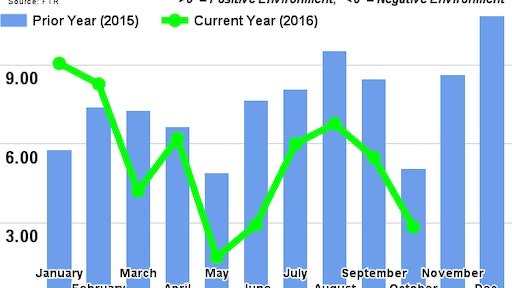 FTR’s Trucking Conditions Index (TCI) for October, at a reading of 2.84, continued the short-term pullback ahead of expected capacity tightening in 2017. While current readings are in low positive territory, the index remains on course to reflect improving conditions for carriers as capacity tightens from regulations being implemented. This will improve pricing and margins for trucking companies through next year. The TCI is forecast to reach its peak in late 2017 or early 2018.

Jonathan Starks, Chief Operating Officer at FTR, comments, “Despite the pullback in the October TCI there is sufficient evidence in the marketplace to indicate a turnaround is in the works for truckers. The spot market has shown a dramatic change with posted loads showing a 40% increase in November versus last year. Combine that with the recent reductions in truck capacity that have finally occurred, and you arrive at a market that is set to see year-over-year rate increases for the first time since the second quarter of 2015. That is 80+ weeks of negative results - even a small improvement will feel really good about now. The change in administration at the White House creates some inherent uncertainty, but we will have a better picture of a Donald Trump presidency fairly soon. The biggest unknown is the impact of ELDs (electronic logging devices) on the marketplace in 2017. If regulations are delayed or expunged, the impact on 2017 will be muted and pricing won’t be as strong as expected. However, the market is already showing a positive shift, and the negative pricing of the last two years is unlikely to last much longer.”