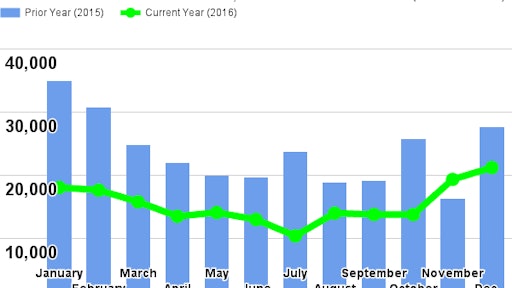 FTR releases preliminary Class 8 net orders for December at 21,200 units, up 10% month-over-month, and spot on the FTR forecast. The solid December order activity is very consistent with the order demand of the last 2 months. Discounting October’s cancellations, Q4 month-to-month orders were extremely stable. Class 8 backlogs should rise significantly in December, giving the market some modest momentum starting off 2017. Net orders were only 164,000 in 2016, but production was aided by the large backlog at the beginning of the year.

Don Ake, Vice President of Commercial Vehicles at FTR, comments, “Another decent month that met expectations. Orders have been following stable, traditional patterns for 6 months now, which is great news after the large drop off in 2016. Production was weak in December, but based on the Q4 orders, it should begin a modest recovery in February.

“The most recent economic news has been positive, so freight demand should keep orders propped up for a few more months. 2017 still looks to be a tough year, but now backlogs are growing and that means the worst should be behind us for now.”