A lower Class 8 order number was expected due to the majority of fleets already having all their orders in for 2019 and not needing to place any more orders for a while. 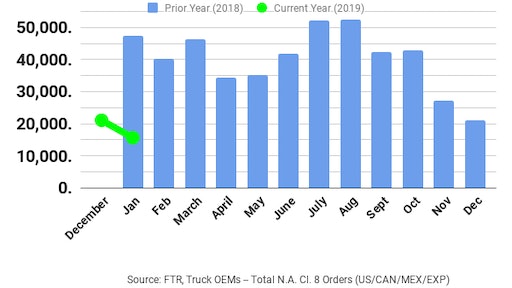 FTR reports preliminary North American Class 8 orders for January 2019 dropped 26% month-over-month to the lowest since October 2016 at 15,600 units. This year’s January order activity was down 67% versus last year and is the worst for the month since 2010. The low Class 8 order number was not entirely unexpected, as the great majority of fleets already have all their orders in for 2019 and don’t need to place any more orders for a while. Backlogs are expected to fall, but should remain over 70% higher than a year ago. Class 8 orders for the past 12 months have now totaled 402,000 units.

Don Ake, FTR Vice President of Commercial Vehicles, comments, "Orders had to fall below 20,000 units at some point. There were record breaking orders placed last July and August, and this is the payback for that volume. Even with the weak January numbers, over 330,000 trucks have been ordered in the last nine months, so demand for trucks in 2019 remains strong.

"This is more of a resting point than a turning point. There is an enormous amount of orders in the backlog. The key will be how many of these trucks get built and when. The fundamentals of the economy and freight growth remain solid, so there is no reason to panic. The production rates the first few months of the year will be a better indicator of Class 8 demand than current orders are. We do expect the cancellation rate to remain elevated, as fleets move their orders around in the backlog. Order rates are expected to remain suppressed for a few months, but build rates and retail sales are forecast to climb."

Final data for January will be available from FTR later in the month as part of its North American Commercial Truck & Trailer Outlook service.