Sideguard Assist monitors the entire length of the vehicle and also takes into account the trailer's tractrix curve, and uses a warning light followed by an audible tone to alert drivers. 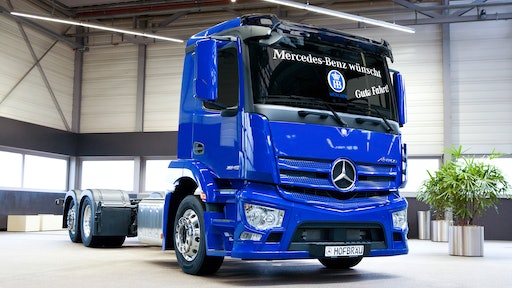 Hofbräu München's royal blue distribution trucks will be driving under the three-pointed star in the future: this traditional brewery has opted for five Mercedes-Benz Antos vehicles which are ideally equipped for work in challenging urban traffic. The radar-based Sideguard Assist was a key factor in the Munich-based company's decision. Daimler Trucks & Buses is currently the only manufacturer offering this type of safety assistance system fully integrated into the vehicle architecture. It enables cyclists and pedestrians to be protected because they are not overlooked in turbulent traffic conditions. Sideguard Assist initially uses a warning light followed by an audible tone to draw the driver's attention to the critical right-hand side. As it monitors the entire length of the vehicle and also takes into account the trailer's tractrix curve, it is able warn of the danger of a collision with traffic lights or streetlamps, too. The trucks also boast the Safety Package with the emergency braking assistance system Active Brake Assist 4 as well as Lane Keeping and Attention Assist and a driver's airbag.

Jürgen Breitsameter, Head of Logistics at Hofbräu München, comments, "For us it's absolutely essential that drivers and all other road users are as safe as possible on the roads. That's why we have equipped our trucks with the full safety package. We were impressed by the Mercedes-Benz assistance systems."

The five trucks can also cope with other tasks: two of the trucks are equipped with a tank body and deliver to the Hofbräuhaus in the center of Munich on a daily basis. This means that they have to be able to move safely among the many pedestrians and cyclists. The two tankers have an electric pump operated with a low-noise electrical connection. In addition, one of the two tankers as a power take-off which can also be used for operating the electric pump. This is particularly useful if there is no power connection – such as at the Munich Oktoberfest, the "Wiesn." Three of the vehicles come with a tilting-wall body for transporting beverages. A steered trailing axle makes four of the heavy-duty distribution trucks highly maneuverable. Thanks to the use of low frames, all five vehicles can safely drive through Munich's tunnels, which are often low.

Equipping the trucks with Fleetboard makes them a perfect fit for the brewery's fleet. The telematics system facilitates precise vehicle and fleet management. In addition to this, via Mercedes-Benz Uptime the fully automatic Telediagnostics system monitors the status of the vehicle's systems continuously in real-time, responds in good time to critical statuses and flags up relevant servicing and repairs. This can prevent defects and reduce downtime.

The story of Hofbräu München began with a culinary challenge more than 400 years ago: as his royal court did not like the beer brewed in Munich, Wilhelm V, Duke of Bavaria, founded the Hofbräuhaus – the birthplace of the brewery and gastronomy – in 1589. Today, Hofbräu München is one of two remaining traditional Munich breweries still in Bavarian hands.